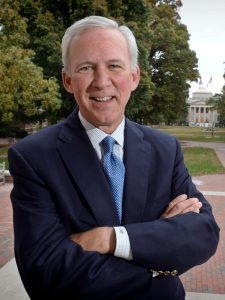 David S. Routh is the vice chancellor for university development. He is UNC-Chapel Hill’s senior development officer and oversees the Office of University Development staff, which works closely with campus fundraising offices and affiliated foundations that support schools, the College of Arts and Sciences and other units.

Routh also is chief executive of the UNC-Chapel Hill Foundation Inc., a nonprofit corporation that receives gifts on behalf of the University, its schools and units.

Routh is a veteran corporate executive with extensive connections to philanthropy on campus as a staff member and volunteer. He served as managing director for U.S. Trust/Bank of America Private Wealth Management in Raleigh, North Carolina, and, before taking the vice chancellors post in October 2013, spent 17 years of his career serving individuals, families and their charitable interests, including colleges and universities, private foundations and charitable trusts.

He previously served as Carolina’s director of gift planning in the Office of University Development from 2006 to 2009 during the Carolina First Campaign, which raised a record $2.38 billion over eight years. He has been vice chair of the UNC Lineberger Comprehensive Cancer Center’s Board of Visitors and chair of its Capital Campaign Planning Committee. He is a past board member and committee chair for the UNC Parents Council. A native of Greensboro, North Carolina, Routh is a 1982 UNC graduate, earning Phi Beta Kappa honors with bachelor’s degrees in economics and religious studies.

Routh has served on the Council for Entrepreneurial Development’s board of directors, including its finance committee. He is a former member of the board of advisors of the Wildacres Leadership Initiative, which houses the William C. Friday Fellowship for Human Relations, a statewide leadership development program.