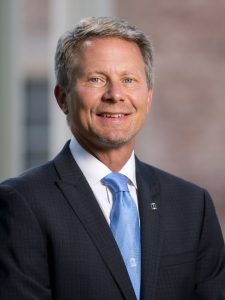 Kevin M. Guskiewicz, a neuroscientist, academic leader and concussion researcher, is the twelfth chancellor of the University of North Carolina at Chapel Hill.

Prior to his appointment as chancellor, Guskiewicz served as the interim chancellor from February 2019 until December 2019. In that role, he held over 25 listening and learning sessions with constituents across campus. He was instrumental in shaping Carolina’s new strategic plan, Carolina Next: Innovations for Public Good that outlines a roadmap for the University’s priorities moving forward. He relaunched the Tar Heel Bus Tour with 90 faculty and campus leaders, demonstrating Carolina’s commitment to the state.

A Kenan Distinguished Professor of Exercise and Sport Science, he has been a member of Carolina’s faculty since 1995. He is co-director of the Matthew Gfeller Sport-Related Traumatic Brain Injury Research Center. Guskiewicz is a nationally recognized expert on sport-related concussions. He maintains an active research portfolio and is principal investigator or co-principal investigator. on three active research grants totaling over $20 million. His groundbreaking work has garnered numerous awards and has influenced concussion guidelines in the NCAA and the NFL.

Prior to his appointment as interim chancellor in February 2019, Guskiewicz had served as dean of the College of Arts and Sciences – Carolina’s largest academic institution – since January 2016. With more than 16,000 undergraduate students and 2,500 graduate students, Guskiewicz made interdisciplinary teaching and research a cornerstone of his tenure. He championed the use of high-structure active learning techniques, and Carolina is a national leader in implementing these highly effective educational strategies. He significantly increased study abroad, academic internships and other experiential learning opportunities for Carolina students and oversaw work on a major revamp of UNC-Chapel Hill’s General Education curriculum.

In 2011, Guskiewicz received the prestigious MacArthur Fellowship (often called a “genius grant”) for his innovative work on the diagnosis, treatment and prevention of sport-related concussions. In 2013, Time magazine named him a Game Changer, one of 18 “innovators and problem-solvers that are inspiring change in America.”