Director of Finance and Human Resources 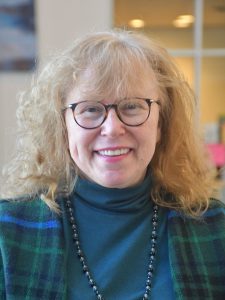 Martha Martin is the director of finance and human resources for UNC Global. Martin joined the University of North Carolina at Chapel Hill in 2005 after moving to Chapel Hill from New York City, where she enjoyed a successful career in media sales and marketing management. Since coming to UNC, her job focus has been in financial management, human resources management, and research administration. She has worked as a manager in the Department of Psychology and Neuroscience in the College of Arts and Sciences, at the UNC Injury Prevention Research Center, in the Office of Sponsored Research, and most recently at the School of Information and Library Science (SILS). As the head of research administration at SILS, Martin assisted faculty in significantly increasing their external funding portfolio by doubling the number of submitted proposals per year and winning 40 new projects during her four-year tenure. Prior to Carolina, Martin was responsible for national advertising sales and marketing programs at media companies such as E! Entertainment Television, Disney-ABC Television Group (formerly Cap Cities/ABC), and News Corp. Martin earned the certified research administrator designation in 2015 from the National Research Administrators Certification Council.