‘Bridges Between East and West’ with Poet Ronny Someck

Poetry reading with Ronny Someck. This in-person event will feature readings by the poet and translations in English.

Visitor parking options include the Morehead Planetarium lot, meters on Franklin Street, and surface lots on Rosemary Street. Free and open to the public. Campus map/parking. 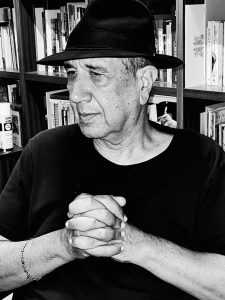 RONNY SOMECK was born in Baghdad in 1951 and came to Israel as a young child. He has published 13 volumes of poetry (The last called “so much god “) and two books for children with Shirly Someck. He has been translated into 44 languages. Selections of his poems have appeared in Arabic translation, French, Catalan, Albanian, Italian, Macedonian, Yiddish, Croatian, Nepali, Dutch, Danish, Portuguese, Spanish, Germen, Turkish, Russian and English.

His book “the milk underground” (White Pine Press) was awarded the Cliff Becker Book Prize in Translation 2015 USA. He is recipient of the “Wine poem award” in Struga Poetry Evenings, Macedonia, 2005 and Hans Berghhuis prize for poetry 2006, Holland. He has been awarded the Cross of The Order of The Knights of Poland and the knight of the Order of Arts and Letters of France.