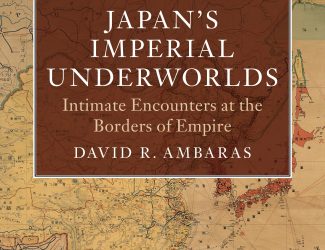 In this presentation, David Ambaras will examine the histories of people who moved, the relationships they created and the anxieties they provoked, in the spatial and social borderlands between Japan and China from the 1860s to the 1940s. Japan’s imbrication in new geopolitical structures and spatial flows engendered forms of intimacy that were seen as problematic, or even horrific, because they transgressed notions of territory marked by stable, defensible borders and notions of place marked by distinct identities and social roles. Yet rather than see those borders and roles as already established and thus violated, Ambaras use cases of transgressive intimacy to highlight the ways in which territoriality and spatial imaginaries were being articulated in the imperial era. Excavating long-forgotten histories of child trafficking, marriage migration and piracy, he argues that mobile subjects in marginal locations not only destabilized official projects for the regulation of territory and the policing of underworlds, but also stimulated fantasies that opened new spaces for the elaboration of imperial power in its material and discursive forms.

Ambaras is an associate professor at North Carolina State University. His research explores the social history of modern Japan and its empire, particularly through a focus on transgression and marginality.

This event is organized by the Carolina Asia Center.