Environmentalism During The Weimar Era

This event is part of 2022 Campus Weeks!

Join the Center for European Studies for a conversation with Paul Dobryden, Assistant Professor in the Department of Germanic Languages and Literatures at the University of Virginia, on his new book The Hygienic Apparatus: Weimar Cinema and Environmental Disorder (2022). Christina Weiler, Teaching Assistant Professor and German Language Program Director in GSLL as well as President of the North Carolina chapter of the American Association of Teachers of German (NCAATG) through 2024, will moderate the Q&A after the lecture. Dobryden’s study traces how the environmental effects of industrialization reverberated through the cinema of Germany’s Weimar Republic. In the early twentieth century, hygiene encompassed the many attempts to create healthy spaces for life and work amid the pollution, disease, accidents, and noise of industrial modernity. Examining classic films—including The Last Laugh, Faust, and Kuhle Wampe—as well as documentaries, cinema architecture, and studio practices, Paul Dobryden demonstrates how cinema envisioned and interrogated hygienic concerns about environmental disorder.

Paul Dobryden received his doctorate in German Studies from the University of California, Berkeley, in 2014. In 2016 he moved to Charlottesville, where he is an Assistant Professor in the Department of Germanic Languages and Literatures at the University of Virginia. He has written widely on Weimar cinema and culture in journals such as Studies in European Cinema, Colloquia Germanica, Modernism/modernity, and The German Studies Review (forthcoming). His research focuses on cinema’s intersections with modern conceptions of health and environmental transformation in early twentieth century Germany. His book The Hygienic Apparatus: Weimar Cinema and Environmental Disorder (Northwestern University Press) was published in May 2022. 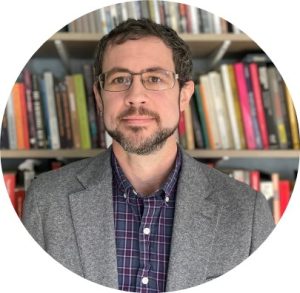