Get Involved with the Bertelsmann Foundation’s Transatlantic Projects 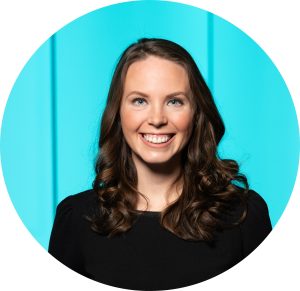 Sara Leming joined the Bertelsmann Foundation in November of 2021 as a Research Analyst. A graduate of James Madison University with a Masters in European Union Policy Studies, where she studied in Florence, Italy and served as the graduate assistant. Her work since then has focused on transatlantic relations.

Sara received her undergraduate degree in Political Science and Leadership Studies from Christopher Newport University. Prior to joining Bertelsmann, Sara worked abroad in Brussels, Belgium as a trainee at the U.S. Mission to the European Union and the Wilfried Martens Centre for European Studies. Most recently she worked as a trainee policy adviser at the EU Delegation to the United Nations in New York City, NY and on the Government Projects team at the German American Chamber of Commerce in Chicago, Illinois.

Sara is originally from northern Virginia. She speaks some Spanish. Daniela Rojas Medina joined the Bertelsmann Foundation in October of 2021 as a Research Analyst. Her work specifically focuses on technology policy issues and the transatlantic relationship.

Daniela recently obtained her Master’s degree from Georgetown University’s School of Foreign Service, where she did research on emerging technology and privacy, particularly the benefits and risks of vehicle-to-everything communication technology (V2X). She also graduated from Penn State University with BA degrees in International Politics and German, as well as a minor in Global Security.

Prior to joining Bertelsmann, she was a Program Officer at the German American Business Council in Washington, D.C. and interned with the BMW Group’s Government and External Affairs team, World Learning’s International Visitor Leadership Program and the Friedensburg-Oberschule in Berlin.

Originally from Venezuela, she speaks fluent Spanish and, having spent some time in Switzerland and Germany, she also speaks German