The Office of the Vice Provost for Global Affairs at the University of North Carolina at Chapel Hill, in collaboration with Carolina’s Modern Indian Studies initiative, will host a panel discussion on U.S.-India relations under the Biden administration via livestream at 6 p.m. EDT on April 7, 2021.

The panel will feature Ambassador Taranjit Singh Sandhu, India’s ambassador to the U.S., and Ambassador Richard Verma, former U.S. ambassador to India. Anusha Chari, director of the Modern Indian Studies initiative and professor of economics and finance at UNC-Chapel Hill, will provide opening remarks. Ambassador Barbara Stephenson, vice provost for global affairs and chief global officer at UNC-Chapel Hill, will give welcoming remarks and moderate the discussion. The panel will allow the diplomats to share their thoughts on how relations between the United States and India are likely to unfold under the Biden administration.

This panel discussion will be held via Zoom livestream and registration is required in advance.

This event is presented as part of Diplomatic Discussions, a series organized by the Office of the Vice Provost for Global Affairs, which brings diplomats and foreign relations experts to UNC-Chapel Hill to discuss important issues in diplomacy and international affairs.

The Modern Indian Studies initiative at UNC-Chapel Hill, affiliated with the Carolina Asia Center, is designed to transform the study and understanding of contemporary India for students, researchers, entrepreneurs and future leaders. The initiative was developed with support from leaders from North Carolina’s Indian American community. 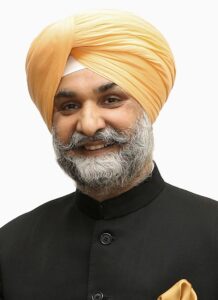 Ambassador Taranjit Singh Sandhu is India’s ambassador to the U.S. and has worked on U.S.-India relations in multiple roles throughout a distinguished career of over 30 years in the Indian Foreign Service. Previously, he served as deputy chief of mission to the Indian Embassy in the U.S. from 2013 to 2017 and from 1997 to 2000 was the first secretary at the Indian Embassy to the U.S., responsible for liaison with the U.S. Congress. He was also assigned to the Permanent Mission of India to United Nations in New York from July 2005 to February 2009.

Ambassador Sandhu was consul general of India in Frankfurt from September 2011 to July 2013. He has worked in the Ministry of External Affairs in various capacities: as joint secretary (United Nations) from March 2009 to August 2011; and later as joint secretary (administration) heading the Human Resource Division. He was officer on special duty (press relations) for the Ministry of External Affairs from December 1995 to March 1997 and was responsible for liaison with foreign media in India.

Ambassador Sandhu started his diplomatic career as third secretary (political) and second secretary (commercial) in the Indian Mission to the former Soviet Union from 1990 to 1992. Following the dissolution of the Soviet Union, he was sent to open a new embassy in Ukraine. He served as the head of the political and administration wings in the Indian Embassy in Kiev from 1992 to 1994.

Ambassador Sandhu holds a degree in history from St. Stephens’ College in Delhi and a master’s in international relations from the Jawaharlal Nehru University in New Delhi. He is married to Reenat Sandhu, the Indian ambassador to Italy.

Ambassador Sandhu assumed charge as ambassador to the United States on Feb. 3, 2020. Ambassador Richard Verma served as the U.S. ambassador to India from 2014 to 2017. Verma has over 25 years of international experience across senior levels of business, law, diplomacy and the military. Currently, Verma serves as executive vice president for global public policy and regulatory affairs at Mastercard.

As U.S. ambassador to India, Ambassador Verma led one of the largest U.S. diplomatic missions and championed historic progress in bilateral cooperation on defense, trade and clean energy.  He also served as assistant secretary of state and worked on Capitol Hill as the national security advisor to the Senate majority leader.

Ambassador Verma practiced law for many years at Steptoe & Johnson in Washington D.C., and is the former vice chairman of The Asia Group, a leading consulting firm.  In addition, he is a veteran of the U.S. Air Force and the recipient of a number of awards and decorations, including the State Department’s Distinguished Service Award.

He is a senior fellow at Harvard University’s Belfer Center for Science and International Affairs and a trustee of Lehigh University. He serves on a number of boards and commissions, including the T. Rowe Price corporate board and the National Endowment for Democracy.

He holds multiple degrees, including a doctorate from Georgetown University and a J.D. from American University. Ambassador Barbara Stephenson became the inaugural vice provost for global affairs and chief global officer at the University of North Carolina at Chapel Hill in 2019. She leads UNC Global and advances a pan-university strategy to enhance Carolina’s global reach, impact and reputation.

Ambassador Stephenson, a fierce advocate for the role of higher education in constructively addressing complex global challenges, has extensive experience forging constructive collaborations across borders and societies. Previously, Stephenson was president of the American Foreign Service Association from 2015-2019 and was a U.S. Foreign Service officer for over 30 years. As dean of the Leadership and Management School at the Foreign Service Institute, Stephenson launched the Culture of Leadership Roundtable to improve leadership across the State Department and U.S. embassies.

In 2008, she was appointed U.S. ambassador to Panama and later became the first woman to serve as deputy ambassador and acting ambassador at the U.S. Embassy in London. Other senior positions within the State Department include deputy senior advisor to the secretary and deputy coordinator for Iraq, consul general in Belfast, Northern Ireland, and consul general and chief of mission in Curaçao. Other assignments have included special assistant to Under Secretary for Political Affairs Tom Pickering (covering European affairs), desk officer for the UK, political-military officer in South Africa, and political officer in The Hague, San Salvador and Panama.

Ambassador Stephenson, who earned her doctorate, master’s, and bachelor’s degrees. from the University of Florida in English literature, speaks Spanish and Dutch and reads French and Hebrew. Anusha Chari serves as director of the UNC Modern Indian Studies initiative and is a professor of economics and finance at the UNC-Chapel Hill. She is the associate chair and director of mentoring for the American Economic Association’s Committee on the Status of Women in the Economics Profession (CSWEP). She is also a research associate in the National Bureau of Economic Research’s International Finance and Macroeconomics Program, research fellow at the Centre for Economic and Policy Research, at the Kenan Institute of Private Enterprise and the Raj Center on Indian Economic Policies at Columbia University. She received a doctorate in international finance from UCLA and a bachelor’s degree. in philosophy, politics and economics at Balliol College at Oxford and economics at the University of Delhi. She was the recipient of a Radhakrishnan Scholarship for study at Oxford and a University of California Office of the President Dissertation Fellowship.

She has held faculty positions at the University of Chicago Booth School of Business, the University of Michigan and The Haas School of Business at the University of California, Berkeley. She was a research associate at the Swiss Institute of Banking and Finance in St. Gallen, Switzerland, and a summer intern at the International Monetary Fund. Chari was a special advisor to the Indian Prime Minister’s Economic Advisory Council and member of an Advisory Group of Eminent Persons on G20 Issues. Her research is in the fields of open-economy macroeconomics and international finance. Chari is the author of multiple articles published in leading academic journals, such as the Journal of Finance, Review of Financial Studies, Journal of Financial Economics, American Economic Journal-Macroeconomics and Journal of International Economics. Chari teaches courses on Multinational Financial Management, International Financial Markets, and Open Economy Macroeconomics in the M.B.A, B.B.S.A. and Ph.D. programs at UNC-Chapel Hill.