Virtual: ‘Reporting from Jerusalem: Behind the Headlines with NPR International Correspondent Daniel Estrin’ 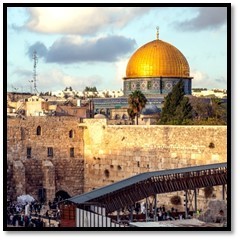 NPR International Correspondent Daniel Estrin joins the Center for Middle East and Islamic Studies from Jerusalem to share reflections on his recent reporting about the ordinary and extraordinary lives of Israelis and Palestinians.

Estrin has reported from the Middle East for over a decade, including seven years with the Associated Press. Since joining NPR in 2017, he has reported from Israel, Gaza, the West Bank, Iraq, Syria, Lebanon and the United Arab Emirates. Other reporting has taken him to Britain, Egypt, France, Germany, Greece, Jordan, Russia and Ukraine. His work has appeared in The New York Times, The Atlantic, The New Republic, PRI’s The World and other media.