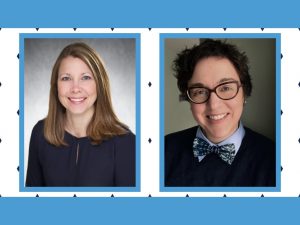 Melissa Miller and Katie Bowler Young each received a 2021 Governor’s Award for Excellence, the highest honor given to a state employee for dedicated service to North Carolina and its citizens. The virtual ceremony was held Oct. 26 at 10 a.m.

Miller is the director of the clinical microbiology and molecular microbiology laboratories at UNC Medical Center and a professor of pathology and laboratory medicine. She received the Public Service award for her work developing some of the first COVID-19 testing in the state and conducting more than 300,000 tests during times of staff and supply shortages. Through her work with the American Society for Microbiology, Miller also served as a consultant to the White House and U.S. Customs and Border Protection. She worked to raise the flag about testing shortages after finding that most labs were testing at only 50% capacity.

Bowler Young recently left her role as senior director for global partnership and programs at UNC Global to take a position at Duke University. She received the Outstanding Government Service award for leading the University’s pilot Collaborative Online International Learning (COIL) program in 2020-21. COIL courses connect Carolina faculty and students with their counterparts at partner universities abroad. In the program’s first year, when options for students to obtain a global education by traveling were limited, over 450 students enrolled in COIL courses with partners in 13 countries, and 41 faculty from numerous UNC schools and departments in the College of Arts & Sciences received curriculum development awards to introduce the COIL method in their undergraduate and graduate courses. The average cost of COIL courses to the University is under $300 per student — far less than the cost of studying abroad. Students in the COIL courses do not pay any additional tuition or fees, making the COIL approach genuinely accessible for all Carolina students and “inclusive by design.”

The winners each received a plaque with their picture and language from their nomination, as well as an award certificate.

Both Miller and Bowler Young attributed their successes to team collaboration.

“I want to underscore how much I believe that my award is a reflection of the dedication and hard work of the global partnership and programs team and the faculty we worked with to be able to make the program the success that it has become,” Bowler Young said.

She is grateful not only for her team in the global partnership and programs office and the Office of the Vice Provost for Global Affairs, but also the network of faculty she built over her 13 years at Carolina.

“Their creativity and care for students being able to continue having a global education, even at the onset of the pandemic, made it possible for this program to be as successful as it was in such a short period of time and in such a difficult period of time,” Bowler Young said.

“I’m getting the award,” Miller said, “but it is really the work of a lot of people that led to the success of this testing program and the continued success of this program — the pandemic’s not over.”

She said she was touched to learn from her department chair that she had been nominated for extraordinary service.

“My job is to serve our patients. My job is to serve the people of North Carolina, and that they felt that I had gone above and beyond was certainly flattering,” she said. “Even though my name is lucky enough to be on the award, there are many people behind me, supporting me, doing the testing. It sounds cliché, but there’s no question that this took a village — it took a pretty big village, quite honestly.”

Miller was especially grateful that her award was in public service.

“I think of all the potential awards, in terms of my career, for it to be the Public Service award profoundly gets to my heart,” she said. “To think of what our lab has been able to accomplish — affecting so much of the state and outside of the state — it really reminds me why I do what I do.”

Jessica Pyjas, Carolina’s work/life and wellness program manager, oversees the nomination process at Carolina. Pyjas said that the University can nominate up to 12 employees, but that has never happened. She said the largest nomination year she has seen was 2020 with eight nominations.

Four Carolina employees were nominated this year, adding to a total of more than 350 state employee nominations. In all, 39 awards were given. Miller and Bowler Young are the first winners from Carolina since 2015.

“The University is so large. I think there are many people that could be recognized more often,” Pyjas said. “It’s really about knowing that this [award] exists and taking the time to nominate someone that you feel is worthy.”