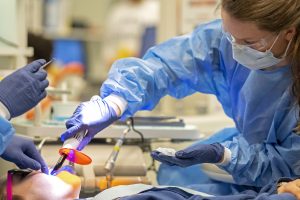 The University of North Carolina at Chapel Hill Adams School of Dentistry maintained its rank as the number two dental school in the world in the 2021 Academic Ranking of World Universities (ARWU) released by the Center for World Class Universities at Shanghai Jiao Tong University.

The Adams School of Dentistry was not the only Carolina unit to receive high marks. The University overall ranked 29th in the world. Additionally, 10 other academic subject areas were ranked in the top 20 globally. Those include:

For the overall global rankings, ARWU evaluates universities based on objective indicators, including the number of alumni and staff winning Nobel Prizes and Fields Medals, highly cited researchers, papers published in Nature and Science, papers indexed in major citation indices and the per capita academic performance of an institution. ARWU first published university rankings in 2003 and now ranks more than 2,000 universities each year. The top 1,000 universities are published annually.