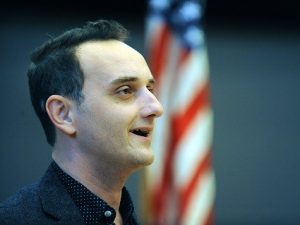 I am truly humbled to be part of this ceremony, of this very important day to all of you. I would like to thank my colleague Ingrid Smith for inviting me to share what becoming an American citizen has meant to me.

To do that, I have to go back to February 25, 2000, the date I arrived in the U.S., or should I say in the middle of nowhere, because that’s how the sleepy and snow-­‐covered town of Lincoln, Nebraska, appeared to me at the time. My parents and I were resettled from Germany where we had lived for a few years as refugees from Bosnia.

Coming to the United States as a twenty-­‐year-­‐old seemed like the most exciting thing that could ever happen to me – less so for my parents, whose lives had been turned upside down by war, displacement and uncertainty for the future of their kids and their own.

Now almost 18 years later, I realize that the U.S. has been my home for longer than the country where I was born and raised, yet I still default to saying that I am Bosnian when people ask – and people ask as soon as they hear an accent, which I am not trying to hide. And while my native language is Bosnian, English is the language that I use all the time with my wife, daughter, friends and colleagues – Bosnian, hardly ever anymore, and maybe only with my parents and students.

So I wonder, why is that? At what point will it become a second nature to call myself American or at least both American and Bosnian. And some of you might be asking yourselves that same question as you become “naturalized.”

Having an academic background in linguistics, I can’t help but wonder about the meaning of this word “naturalization,” to be “naturalized” – surely it has a clearly defined legal meaning, implying both obligations and entitlements of citizenship, but how many of you will call family and friends after today’s ceremony and say, “I have just been naturalized”? Maybe a few of you will, but my guess is that most of you will feel a lot more comfortable with saying “I am finally an American citizen” or even “I am an American now.”

But please indulge me for a second in my linguistic musings, because by the rules of English grammar, to be naturalized reflects upon the object not the subject – the one being naturalized, not the one doing the naturalizing. It recognizes you –  the new citizens, the new Americans, but it also suggest that something should become natural, a second nature so to speak, as in feeling comfortable with calling yourself American just as you would be with calling yourself Ukrainian, Mexican or Indian, just to give a few examples.

But there is also another dimension to “naturalization” that’s a lot harder to untangle, at least for me, and that is the idea of feeling naturally at home. And as I am sure you will agree, how can we talk about citizenship and not mention home and the feeling of belonging?

I am not the first, nor the last to say this, but the Unites States represents an incredible range of social, ethnic and cultural diversity. And I say this today with the same sense of awe as I did when I first arrived here. But sometimes this can make it harder to find your community, to anchor yourself in a place, to find meaning in things that ultimately define a sense of home (a certain landscape, people, language, customs).

Having lived here for 18 years, I am starting to realize that home is in little things – in the way a barista remembers how to spell my name correctly on the coffee cup, in friendly nods from strangers that I see repeatedly on the bus on my way to work, or in an old R&B song playing on the radio – and these are just some examples from this morning. So it’s these small gestures, rituals and sounds that have now become important anchors around which I construct a sense of home, my own idea of America.

All that is to say, I hope that today’s moment of celebration will become one of your many anchors around which you can imagine and REIMAGINE yourself as Americans, as new citizens, and most importantly as something that helps you feel more at home where you are now.