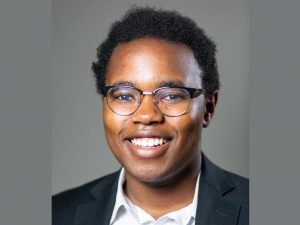 Kimathi Muiruri '21, who majored in history and environmental studies, was a Morehead-Cain Scholar, a member of Phi Beta Kappa and is an Honors Carolina laureate. He is the third Tar Heel to be named a Rhodes Scholar this fall.

Carolina alumnus Kimathi Muiruri has received the prestigious Rhodes Scholarship, making him the 54th Tar Heel to be named a Rhodes Scholar.

Muiruri, a member of Carolina’s Class of 2021, was a Morehead-Cain Scholar, a member of Phi Beta Kappa and is an Honors Carolina laureate. He majored in history and environmental studies.

He also served as the editor-in-chief of the Carolina Political Review, was a member of Carolina’s men’s rugby football club and was an undergraduate editor for Traces — Carolina’s student-run history journal. Muiruri is also a world-class debater. He served as the captain of the 2017 Canadian World Schools Debate Championship team and was named the top speaker of Canada’s National Debate Championship in 2017.

“We are always delighted when a Tar Heel earns a Rhodes Scholarship. This incredible achievement is a testament to Kimathi’s hard work and dedication at Chapel Hill,” said Chancellor Kevin M. Guskiewicz. “I look forward to seeing his accomplishments as a Rhodes Scholar and beyond.”

Setting a record for Carolina, Muiruri is the third Tar Heel to earn the award this year, joining senior Takhona Hlatshwako and alumnus Justin Hadad.

Road to the Rhodes

Raised in Pickering, Ontario, Muiruri made the 810-mile move to Chapel Hill for college to experience something new.

“One of the main reasons why I wanted to come to UNC is because I wanted to experience my formative years in a different place than my childhood and adolescence,” he said. “I wanted that experience of starting fresh and discovering new people, cultures, experiences — both academically and interpersonally.”

Starting fresh academically meant enrolling in different kinds of courses during his first year at Carolina. Muiruri initially planned on majoring in biology or public health but re-discovered his love for the humanities after taking a history course called “Monsters, murder and mayhem: Micro historical analysis through French case studies,” taught by history professor Jay Smith. The course ignited a passion in history that Muiruri nurtured throughout his Carolina career.

“Academic history is so much richer, so much more meaningful than any other subject that I had ever been exposed to,” he said. “There are so many more possibilities for what to study, how to study, who to study with and who to read about than in any other discipline.”

With support and mentorship from the College of Arts & Sciences’ history department, Muiruri continued to dive deeper into history. His senior honors thesis analyzed the social lives and political organizing of African migrant laborers in 19th-century South Africa. He even served as a research assistant and French translator for research in the history department.

After taking an anthropology course in his second semester at Carolina, Muiruri’s interest in history began to intersect with his lifelong passion for environmentalism.

“I started to think that this is a world-historical issue. This is a civilization issue. It’s one that intersects very deeply with issues of history — especially history of the modern era in terms of globalization, colonialism, capitalism. The development of these structures is very closely tied to the destruction of the environment and dispossession of the Global South,” he said. “I began to understand environmentalism and history not being discrete pursuits, but as two co-terminal fields. To do well in one, one necessarily has to understand the development and implication for the other in both directions.”

Since graduating, the Tar Heel has been supporting research on land, agriculture and food systems at the Columbia Center on Sustainable Investment, an applied research center based out of Columbia University’s Law School in New York City.

As a Rhodes Scholar, Muiruiri will examine that connection further by studying environmental change and management at Oxford University’s School of Geography and Environment. He said the program is a synthesis of his two majors and will build on the foundation that he established at Carolina.

“My hope is that gaining a firm handle on issues of environmental injustice from a really excellent department will advance me to the level of proficiency that I need to be an effective agent of change,” he said. “I’m looking to build my skills and my capabilities to the point where I can understand the intricacies and the vastness of the global environmental challenges that we’re facing.”

But the Rhodes Scholarship is more than just classwork. Muiruiri is excited to join a community of diverse and passionate scholars and leaders from around the world.

“I know that the program has produced leaders and people who operate at the forefront of world systems in the past,” he said. “I am excited at the prospect of building relationships with peers and alumni, across scholarly disciplines, who are current and future leaders across the world.”