Ambassador of the Republic of Moldova Visits UNC-Chapel Hill 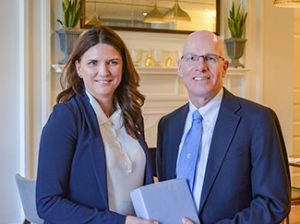 Her excellency Cristina Balan, Ambassador of the Republic of Moldova to the U.S., visited the University of North Carolina at Chapel Hill on Friday, March 29, 2019. Ambassador Balan, along with Veronica Dragnev-Sacara, deputy chief of mission, and Vladislav Nastas, first secretary for the Embassy of Moldova, visited North Carolina to meet with universities, government officials and organizations involved in the North Carolina–Moldova State Partnership. The delegation’s visit to the state was organized by the Department of the North Carolina Secretary of State, which organizes the partnership for North Carolina.

The North Carolina–Moldova State Partnership Program was formalized in 1999 as part of the National Guard State Partnership Program, which connected U.S. states with partner countries to facilitate cooperation across civil-military affairs, including civil emergency operations. While the partnership began with the intent to build capacity within military and security affairs in Moldova, it has since expanded into other areas including health care cooperation and cultural, scientific and academic exchanges.

During her visit to Carolina, Ambassador Balan participated in meetings with several UNC-Chapel Hill schools and units that have become involved in the NC–Moldova partnership to learn about the activities and initiatives that have taken place and discuss future areas of interest. UNC-Chapel Hill has been engaged in the North Carolina–Moldova partnership since 2000, when the Adams School of Dentistry began regularly sending faculty and dental students to provide services at a Moldovan orphanage.

In 2007, the Gillings School of Global Public Health began providing guidance in public health-related matters. Faculty and students have worked to improve water and sanitation education in Moldovan schools, shared expertise on issues related to health management and quality of care and provided trainings to increase the region’s capacity to manage disasters. In 2016, the Eshelman School of Pharmacy established a partnership with the State University of Medicine and Pharmacy in Chisinau, Moldova, and regularly sends PharmD students there on international rotation and hosts Moldovan students at Carolina. In June 2019, the World View program will also take K–12 educators to Moldova through a Global Study Visit Program.

“We are proud that so many programs and members of the Carolina community have become involved in the North Carolina–Moldova State Partnership,” said Raymond Farrow, associate provost for global affairs and interim chief global officer. “We view international partnerships as a key element in Carolina’s global mission and an important way for our students and faculty to participate in a global community. We’re pleased to be a part of a relationship that is so important to our state.”