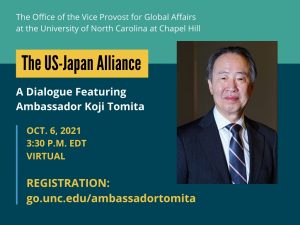 Koji Tomita, ambassador of Japan to the United States, will discuss U.S.-Japan relations—the strong foundations of the alliance and the promise of future cooperation—in a virtual dialogue hosted by the Office of the Vice Provost for Global Affairs (OVPGA) on Oct. 6, 2021 at 3:30 p.m. EDT.

The event is part of the OVPGA’s Diplomatic Discussions series, which brings diplomats and foreign relations practitioners to the University of North Carolina at Chapel Hill to discuss current issues in diplomacy and international affairs. The conversation with Ambassador Tomita will continue the University’s look at U.S. relations with members of “the Quad”—India, Japan and Australia, as well as the U.S. The first in this series, “U.S.-India Relations Under the Biden Administration,” took place on April 7, 2021.

“Carolina is deeply honored to host Ambassador Tomita at Carolina, albeit virtually, for a discussion of U.S.-Japan relations. Ambassador Tomita’s visit aligns wonderfully with our new Diplomacy Initiative, Asia strategy and our deep dive into U.S. relations with each of the ‘Quad’ partners—India, Japan, and Australia,” said Barbara Stephenson. “It also comes at an auspicious time, as UNC forms a Japan Interest Group to explore enhancing collaboration with Japanese universities on shared challenges, such as aging societies.”

The event will be held via Zoom livestream, and advance registration is required.

This event is organized by the Office of the Vice Provost for Global Affairs at UNC-Chapel Hill.