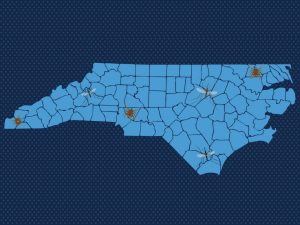 It’s a startling sight that illustrates why North Carolina is home to a wide range of diseases transmitted by ticks and mosquitoes.

“We’re at the crossroads. We have some of the highest rates of diseases that are endemic to the southeastern United States, like spotted fever rickettsiosis and ehrlichiosis, but are also seeing increasing cases of diseases like Lyme disease that are historically associated with areas farther north,” said Boyce.

An assistant professor in the infectious diseases division at the UNC School of Medicine and assistant professor of epidemiology in the Gillings School of Global Public Health, Boyce is collecting information from a network of sources to strategically determine where and how to battle these insects that can change a person’s life for the worse with one bite.

Cooler weather will bring a slight reprieve for hikers and others who spend time outdoors, but Boyce said that he sees cases year-round. In North Carolina’s relatively mild climate, insects may live through the winter. A native of Clemmons, North Carolina, Boyce is quite familiar with mosquitoes and ticks. In the past few years, he’s innovatively used tools such as GPS to target malaria-carrying mosquitos in Uganda, while collecting useful information from local people on their daily lives. He’s excited about the sources and collaborators he’s finding in North Carolina, because he’s used to having far less data to inform decisions.

Beyond clinical data available from UNC Health, Boyce and his team want to use data from such varied sources as commercial laboratories like Labcorp, insurance claim databases, veterinary records, tick surveys, weather and climate records and locations of deer-meat processing stations.

One goal for the diverse data is to improve the state’s “surveillance” — a public health term for a program of ongoing, systematic collection, analysis and interpretation of health-related data. Then, that data can be used to better plan, implement and evaluate measures to reduce insect-borne diseases. The layers of data will aid Boyce’s team in creating “risk maps” that show which areas in the state are most at risk for tick and mosquito-borne diseases to help in targeted control of the insects.

In North Carolina, mosquitoes transmit diseases less commonly than ticks, and the diseases are underrecognized. They include West Nile, eastern equine encephalitis and La Crosse viruses. Infection may cause no symptoms or mild, flu-like illness, although they can cause more serious conditions, including encephalitis, meningitis and meningoencephalitis that result in brain inflammation. When this occurs, patients are often left with long-term neurological symptoms. Infection can occasionally be fatal.

North Carolina and Ohio see the most cases of La Crosse encephalitis, the most common cause of encephalopathy in children. “Western North Carolina, particularly counties around Asheville, is where most of the cases occur,” he said. A cumbersome testing process, Boyce believes, contributes to underreporting. No specific treatment exists for La Crosse, only supportive care. There may be 20 to 30 cases in the state annually, but Boyce said almost all cases are in children who may have long-term aftereffects, making his work more urgent.

Historically, North Carolina has been a hot spot for spotted fever rickettsia, a group of tick-borne bacteria that includes the agent of Rocky Mountain spotted fever. Boyce calls it a complicated picture because multiple tick species transmit the various bacteria, and common diagnostic tests can’t distinguish between them. Plus, it’s often misdiagnosed, he said. Symptoms include fever, headache, body aches and rash. Rocky Mountain spotted fever can be deadly if not treated correctly, while infections with other members of the bacterial family may not require treatment.

Lyme disease, another tick-borne bacterial disease, has long been in the state. Boyce said that cases recently increased, so people should be more aware of it. “It’s spreading along the Appalachians, sometimes in clusters,” he said. “We’re seeing people with it who have not traveled to New York or Connecticut but have been in Boone, Asheville or areas along the Blue Ridge Parkway. There’s more and more of it.”

Illnesses with Midwestern origins such as the Heartland virus and Bourbon virus are also coming. They can cause fever, fatigue, nausea, diarrhea and other symptoms and, with Bourbon, death. “We see antibodies against these viruses in local deer,” Boyce said. “If it’s in deer, then it’s in ticks, and eventually it will transmit to humans.”

Bites from a lone star or blacklegged tick can trigger a red-meat allergy known as alpha-gal allergy. Alpha-gal is a sugar molecule found in most mammals. After eating mammalian meat, people who become allergic to alpha-gal may experience an hours-long delay in symptoms, which include hives, swelling of lips, face, tongue or throat, stomach pain and nausea. It can also cause restricted breathing and death. “I see 20 patients a year with it. I see them in clinic for the infection, because you can get an infection and the allergy at the same time. They’re treated for the infection, but return a few weeks later saying, ‘I still feel crummy. What’s going on?’ It turns out that they have this red-meat allergy.” The only way to positively know a patient has the allergy is to test for antibodies that their bodies developed to fight the infection.

“Quite frankly, I don’t think we have a good idea of what’s going on,” Boyce said. That’s why he’s seeking data and why people are seeking him out. “The first step is to be more purposeful and active in getting better information, so we know what’s out there and where it is,” Boyce said. “We’re trying to do that in several ways, some of which leverages people much smarter than me who do statistical modeling.”

For instance, some of the best data about tick-borne diseases comes from dogs. “Dogs are great for measuring tick-borne diseases because they roll in the grass all the time,” Boyce said. Veterinarians administer an antibody test at least annually to dogs to check for exposure. Combine that county-level data about dogs with Lyme disease or ehrlichiosis with the human data, and Boyce and colleagues may find helpful trends.

Boyce struggled with data collection in Uganda. Early in his Ugandan work in 2013 he found pocket-size notebooks full of penciled malaria records that clinic staff had collected, and he wanted to use them in retrospective studies. “It was like a scene from a Harry Potter movie. I found stacks of record books and was blowing the dust off them,” he said.

He thought his work in North Carolina would be easy, but the data he needed was not readily available, not even in dusty records. “Being comfortable with incompleteness or uncertainty helps,” he said. Boyce works in different circumstances than, say, a cardiologist who inserts dye into a heart and takes an accurate image for diagnosis and treatment.

So he started gathering data.

The research has grown organically as Boyce collaborates with researchers from many disciplines. He’s working with two public health entomologists at the North Carolina Department of Health and Human Services — Alexis Barbarin and Michael Doyle — who oversee tick- and mosquito-borne disease surveillance, control and education. Michael Reiskind, associate professor of entomology at NC State University, is lending his expertise on mosquitoes, along with other entomologists and faculty in veterinary medicine at NC State.

Carolina collaborators include Michael Emch, chair and professor in Carolina’s geography department in the College of Arts & Sciences; colleagues in the Gillings School of Global Public Health and School of Medicine; and Scott Commins, an allergist and associate professor in the School of Medicine’s rheumatology, allergy and immunology division. The Department of Defense, with contacts at Fort Bragg, and faculty at Appalachian State University, East Carolina University, UNC Greensboro, Western Carolina University and the University of South Carolina are working with Boyce.

Boyce’s approach comes partly from his time as a decorated U.S. Army officer during two tours in Iraq. “In the army, you get a mission, you move forward and learn new information, whether it’s good or bad. You adjust the mission and the operation based on what you learn. You repeat that process, all the time trying to move forward. It’s the same here. I try to push forward a little bit each week.”

He also learned that people on a singular mission will have different jobs and responsibilities. Multidisciplinary work, Boyce said, makes his research infinitely fascinating and fun. “The best part of my job is working with great people in other fields who do things that I don’t know anything about.”