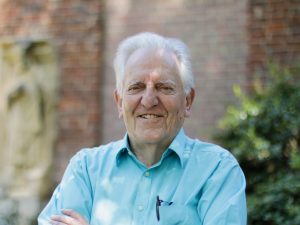 J.R.R. Tolkien and C.S. Lewis, creators of Middle Earth and Narnia, held Christopher Armitage’s fate in their hands. It was July 1954, and the two literary giants joined scholarly giants Helen Gardner, Renaissance scholar and future British Dame, and Lord David Cecil, respected biographer and literary critic, to conduct Armitage’s Viva Voce, or live voice examination to determine if he was to graduate from the University of Oxford.

“It was a quartet I would hate to face, even today,” said Armitage, a Carolina English professor who will retire in July after 53 years.

The examiners had read Armitage’s papers on topics such as Shakespeare’s plays and the 18th-century novel written two months prior, and they sat across from him, ready with questions.

Tolkien taught English language and literature at Oxford from 1925 to 1959, and Armitage took his Medieval Literature course as a freshman in 1950. At the time, Tolkien was known as a scholar whose fantasy novel “The Hobbit” was largely considered a children’s book. But, his “The Lord of the Rings” trilogy was first published that July, and Tolkien’s legacy grew as the books became extraordinarily popular.

Lewis taught at Oxford from 1925 until 1954. His Prolegomena to Medieval Literature course is where Armitage first met the man who, aside from his scholarly works, had already written numerous books including 1950’s “The Lion, Witch and the Wardrobe.”

Both men’s descriptions of medieval literature and the devotion they had for their subjects impressed Armitage. Despite the growing success of their creative writing, neither mentioned his novels in class. Nor did they discuss their time in the trenches of World War I.

Class had ended after discussing the medieval romance “Sir Gawain and the Green Knight.” “There is a refrain in that poem when characters say ‘barlay may,’” Armitage said. “It’s from French, ‘parlez moi’ anglicized, and used when you’re calling for a power play or a comment. So the action is suspended.”

He told Tolkien that he and childhood friends used the expression “barley me” to ask for a time-out while playing soccer or cricket in their neighborhood street.

“Tolkien was quite fascinated and asked where we played games, and I explained to him it was where I grew up in Sale, Cheshire, the county south of Lancashire,” Armitage said.

Jotting the expression in a notebook, Tolkien insisted that Armitage provide the street address. Armitage does not know if Tolkien used the reference in a scholarly work.

“I had no feelings of anxiety about stepping up to the great man, and that was because none of these teachers played the great man or the great woman,” Armitage said.

Tolkien was a bit tweedy and congenial, Armitage said, and sometimes hard to hear from the rear of a large hall. Lewis was more forceful and direct in his delivery. Their lectures were always full of students, unlike some where people tiptoed out early and classrooms were fairly empty by term’s end, according to Armitage.

“That’s because their lectures were about deep subjects, human beings and what brings meaning to life,” he said. “You wanted to pick their brains and you could.”

The two were part of a group of writers and scholars known as the Inklings. They sat in a small alcove of the pub “The Eagle and Child” (know colloquially as “The Bird and the Babe”) talking, drinking and reading drafts to each other. There, Armitage said, it is rumored Lewis chided Tolkien on his slow progress with “The Lord of the Rings.”

As the examination began, Armitage suspected that Tolkien knew him as “one of those chaps who’d been busy playing rugby and had not been reading Dante” but he did not harass his young student.

Still, Armitage realized the examination was going to be a “drastic experience” as opposed to listening in lectures because he had not followed up on important suggestions from each professor, such as recommended reading. For instance, Tolkien wanted to know Armitage’s thoughts on medieval Italian authors Petrarch and Boccaccio. He hadn’t read them, and that was embarrassing.

Armitage recalled, “I made a great mistake of writing in my Renaissance papers about my enthusiasm for John Donne’s secular poems, not his famous “Holy Sonnets,” and that I thought that Donne was the most important Christian poet of the time, whereas Lewis had demonstrated in published work that Spenser with his “Faerie Queene” was really the outstanding Christian apologist.”

Lewis probed Armitage on how closely he’d read Spenser. “My answer was fairly closely, but not as closely as Lewis would like,” Armitage said with a laugh.

Gardner then aimed her questions and soon had Armitage “pinned and wriggling on the wall” – a phrase he borrows from T.S. Eliot’s “Love Song of J. Alfred Prufrock.”

Armitage already knew that Gardner did not think much of him because he had disregarded her admonition to stop courting one of her protégées. “The young lady lived down the hall from Gardner’s office. When I arrived to visit one afternoon, she stepped out to state that her student ‘would have a great future if she were not distracted’,” he said.

Lord David Cecil ended the examination in a substantially different way, asking questions in “a very relaxed and down-to-earth” manner, but Armitage left wondering about his chances of graduation.

Feeding the fishes, then a fresh start

Relief came when Armitage learned several weeks later that his answers were sufficient enough to earn a degree. In October, he and his Canadian fiancée, Pauline, boarded the “Empress of France” ocean liner bound for Canada.

Armitage admits that he had not taken to heart the knowledge and advice he received at Oxford and had no firm plans other than marriage. “As it has often been remarked to me, I’m a slow starter and I had no idea then that I might become an academic,” he said.

He was so certain that he would not be an academic that he dumped all his Oxford papers over the ship’s rail into the Atlantic.

“I walked to the edge of the ship and threw them down there as food for fishes,” he added. “It was just a recognition that I was doing something totally new. I could have wound up being a lumberjack.”

With Pauline’s encouragement, Armitage went back to school and completed a master’s degree in Canadian literature. The couple then moved to North Carolina because Duke University awarded him a scholarship to its doctoral program in English.

Sixty-six years after his Oxford days, Armitage remembers Tolkien and Lewis as models of reliability, consistency and good manners. “They showed me what it was like to be a serious scholar,” Armitage said. “One would have to be widely read and expose one’s views in a public forum where they could be examined and discussed.

“I saw that dedication to an academic calling matters. Both men did so without showing off their learning for applause and self-gratification,” he said.

Read more about Armitage, the “Lion of Greenlaw,” and his career at Carolina in the latest College of Arts & Sciences magazine.