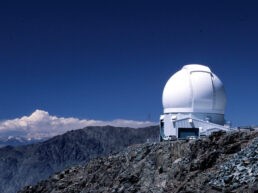 For the first time, hard-to-track lithium has been identified and measured in the atmosphere of burned out stars called white dwarfs, according to a study led by the University of North Carolina at Chapel Hill published online in the journal Science.

Lithium helps power cell phones and computers and stabilize moods. But scientists have been stumped by what’s become of the lithium that was expected from the Big Bang, a discrepancy known as the “cosmological lithium problem.”

While researchers believe exploding stars help distribute lithium throughout the galaxy and deliver most of the lithium we use today in electronics and medicine, the UNC-Chapel Hill study may help measure the amount of lithium created in the initial formation of the universe.

The new insight by UNC-Chapel Hill, University of Montreal and Los Alamos National Lab provides clues for tracking the galactic evolution of lithium.

The discovery was made possible by using the Goodman-Spectrograph mounted on the Southern Astrophysical Research telescope which is operated by the Cerro Tololo Inter-American Observatory, part of the National Science Foundation’s NOIR Lab. Study author and UNC-Chapel Hill astrophysicist J. Christopher Clemens led the design of the unique spectrograph which measures how much light is emitted by a white dwarf. Clemens is also senior associate dean for research and innovation in the College of Arts & Sciences.

White dwarfs are the leftover cores that remain when stars die, and they can be surrounded by rocky worlds.

In the study, researchers describe detecting the crushed-up remains of large asteroid-like objects in the atmospheres of two very old white dwarfs whose planets formed 9 billion years ago — long before our own sun, Earth and solar system developed.

The team was able to measure the chemical make-up of the asteroids, and for the first time identified and measured both lithium and potassium from an extrasolar rocky body.

“Our measurement of lithium from a rocky body in another solar system lays the foundation for a more reliable method of tracking the amount of lithium in our galaxy over time,” Clemens said.

The Big Bang, the leading explanation for how the universe began 13.8 billion years ago, produced three elements: hydrogen, helium and lithium. But lithium measurements in sun-like stars have never added up to scientists’ predictions.

Of the three elements, lithium presents the biggest mystery.

“Eventually with enough of these white dwarfs that had asteroids fall on them, we will be able to test the prediction of the amount of lithium formed in the Big Bang,” said Ben Kaiser, first study author, graduate research assistant and Ph.D. student in the department of physics and astronomy in the College of Arts & Sciences.