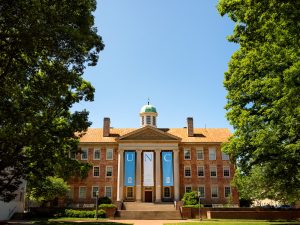 The Open Doors report presents comprehensive data on international students and scholars at U.S. higher education institutions, as well as data on U.S. students studying abroad for academic credit. International scholars are defined by Open Doors as scholars on nonimmigrant visas engaged in temporary academic activities and not enrolled as students at a U.S. college or university.

Due to travel restrictions imposed by the COVID-19 pandemic, this year’s data represents a 9.6% decrease from the previous year in the number of international scholars hosted by U.S. universities, ending 20 years of steady growth. Open Doors reported 123,500 international scholars were hosted at U.S. academic institutions in 2019-20, including 1,254 scholars hosted at UNC-Chapel Hill. Carolina improved its ranking to 26th, up one spot from the previous year.

“Given the extraordinary difficulty of international travel during the pandemic, I am pleased to see that Carolina, a leading global public research university, was able to host these international scholars and even move up a notch in the rankings,” said Barbara Stephenson, vice provost for global affairs and chief global officer. “We count on international scholars to help us achieve our goal of infusing the UNC campus with a global mindset.”

In November, IIE ranked UNC-Chapel Hill 18th in the nation for the total number of students studying abroad for academic credit in 2018-19. Approximately 43% of Carolina undergraduates were able to study abroad before graduation, one of the highest rates for a public university in the U.S.

IIE publishes Open Doors annually in conjunction with the U.S. Department of State Bureau of Educational and Cultural Affairs. Founded in 1919, IIE is a private not-for-profit leader in the global exchange of people and ideas. IIE creates programs of study and training for students, educators and professionals from all sectors in collaboration with governments, foundations and other sponsors. These programs include the flagship Fulbright Program and Gilman Scholarships administered for the U.S. Department of State. In addition, IIE conducts policy research, provides resources on international exchange opportunities and offers support to scholars in danger.