Carolina Rises as Global University with Strategic Partnerships Around the World 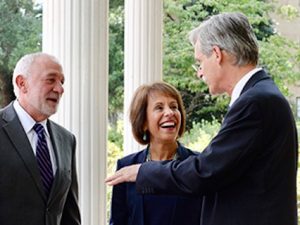 Engler spent time at Carolina as a research fellow in American studies from 1991 to 1992, and Executive Vice Provost and Chief International Officer Ron Strauss is grateful that Engler never forgot the quality and value of the experiences he had here.

“Carolina and Tübingen have operated an undergraduate student exchange since 1986, one of the University’s longest lasting exchanges,” Strauss said.  “Engler becoming president at Tübingen provided an opportunity to reconnect our universities and deepen our scholarly and research collaborations.

In the past few years, faculty connections and research collaborations have developed in disciplines across the University, including biology, environmental sciences, German, humanities, journalism, law, malaria and infectious diseases, pharmacology and philosophy.

More than 100 undergraduate students have spent a semester or year at the partner university. The universities have also engaged graduate students, both in collaborative research with faculty and also through the Teach@Tübingen Program that brings doctoral students, postdocs and junior faculty from Tübingen’s partners to teach in fields where courses in English are underrepresented.

Chancellor Carol L. Folt became engaged in Carolina’s partnership with Tübingen almost as soon as she became chancellor in 2013. In fact, Folt, who previously worked with Tübingen while she was at Dartmouth, serves on Tübingen’s international advisory board, and she and Engler have visited each other’s campuses to keep that connection strong—and growing.

As a result of these ongoing efforts, Strauss added, Tübingen is among Carolina’s six strategic partnerships that involve multilayered collaborations spanning a number of disciplines, schools or departments and receive sustained institutional commitment.

“We have been working closely with President Engler to craft that partnership together over a number of years,” Strauss said. “Tübingen is a great university, similar in size to ours, and it is internationally recognized for its legacy of teaching and research.

“Its arts and sciences programs are housed in the university’s medieval center in the old part of the town in a river valley. On the ridges above the valley are many of the bio-medical and science buildings that look like they were built yesterday.”

When considered in total, Strauss added, it is easy to see that this is a university—like Carolina—with both a deep, rich history and an ever-expanding vision for its future.

Strauss said a major push to think of Carolina as a global university began in 2009 when the University Board of Trustees’ approved the “Strategic Roadmap for Globalizing Chapel Hill.”

Currently, 35 percent of all undergraduates have completed an academic program abroad for credit by the time they graduate, which is double the percentage who studied abroad in 2000. Twenty years ago, Carolina’s study abroad programs were mostly limited to England or western Europe. Today, students can choose from more than 400 programs in 70 countries spanning the globe.

Finally, Strauss points to Carolina’s growing international reputation, as reflected in recent rankings, as an indicator Carolina has been on the right path.

But Carolina still has further to climb, Strauss said, as the mandate from The Blueprint for Next makes clear.

The Blueprint for Next’s vision for Carolina is “to be the leading global public research university in America with outstanding educational programs at the best and most affordable price, to conduct game-changing research and innovate for the public good, and to bring health and prosperity to the citizens of the state, nation and beyond.”

What is no less clear to Strauss is that Carolina will rise faster and farther as a global university if it remains in step and in collaboration with its six strategic partners. And that is why he and Folt and others have invested so much time and effort keeping those relationships strong.

In March, Strauss traveled to Singapore to host an alumni reception and meet with the National University of Singapore, a major partner, and in April he hosted a delegation visiting Chapel Hill from King’s College London. “One of the real thrills for me as I travel is for Carolina students to come up to me and tell me how much they loved their time abroad,” Strauss said. “That complements the international students here who tell me that Carolina is really a welcoming University. ”

It is that lifelong bond with Carolina that they take with them that can make all the difference, Strauss said.

“You might say that’s the graciousness of a fine Southern university, but you have to pair that with the other qualities that Carolina has to offer, which is high-impact science and engagement with people who really care about the work they are doing. That combination is fantastic, and that is what I think the global people who come here fall in love with.”