Carolina Senior Receives the Marshall Scholarship to Study in the UK 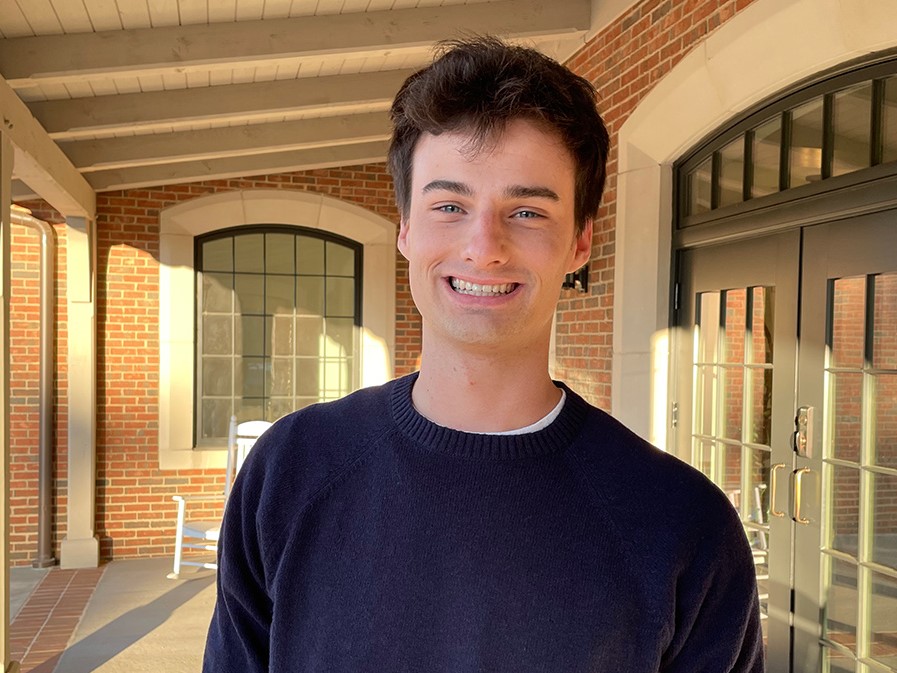 Patrick Clinch, a senior studying history and political science in the College of Arts & Sciences, has been named Carolina’s 21st Marshall Scholar. The prestigious Marshall Scholarship funds graduate studies in any field at up to two institutions in the United Kingdom.

Founded in 1953, the scholarship finances the opportunity for young Americans of outstanding ability to study for a degree in the United Kingdom. The Marshall Scholarships honor the ideals of the Marshall Plan and are named after U.S. Secretary of State George C. Marshall. Marshall Scholarship selectors highly desire applicants who “have the potential to excel as scholars, leaders and contributors to improve U.K.-U.S. understanding.”

“Patrick is an outstanding student whose research around the ways comedy and especially political satire can benefit and support democratic values is particularly relevant in our world today,” Chancellor Kevin M. Guskiewicz said. “The Marshall Scholarship is one of the highest honors bestowed upon our students, and it is a testament to Patrick’s creativity, hard work and enthusiasm at Carolina. I congratulate him on this opportunity to pursue his dreams at Oxford.”

A native of Dunwoody, Georgia, Clinch is a Robertson Scholar, a member of Phi Beta Kappa, an Honors Carolina student, the co-founder of FAIRolina — a student organization that promotes voting rights reform in North Carolina — and a member of the Chapel Hill Players improv and sketch comedy group.

Growing up, Clinch went back and forth between wanting to be the secretary of state and a famous comedian. After developing an interest in political science as a high schooler and at Carolina, he has since landed somewhere in the middle of those two careers.

A history course at Carolina on American pop culture showcased how politics and comedy can intersect in a powerful way and set Clinch on a path to understanding that connection on a deeper level.

“I believe that laughter and silliness are really essential to life,” he said. “We live in a world where a lot of people automatically turn to comedy for information about politics. I think it’s important to understand what role comedy plays in modern political discourse. I’m interested in understanding how it can be used as a tool for good because I believe it has a lot of power — if for no other reason than the fact that it reaches a much bigger audience than policy briefs or political news.”

Clinch dove deeper into the intersection of entertainment and politics in his senior thesis on P.T. Barnum, the founder of the Barnum & Bailey Circus. This thesis traced the political consequences of Barnum’s use of racial stereotypes in several of his shows, highlighting how pop culture can directly influence democracy.

Clinch’s passion for politics led him to Washington, D.C., to serve as a legislative intern for House Majority Leader Steny H. Hoyer. He then worked as a communications intern with the Liberal Democrats during a study abroad semester in London. Those firsthand experiences further fueled his interest in a political career.

“You do get a sense that Capitol Hill, for all its flaws, is a public space and a public hall, and that’s a very inspiring experience,” he said. “You see how people from all walks of life, in one way or another, have their finger on the levers of power in a very real way. It’s hard to see that and not want to be involved.”

But before returning to politics, Clinch will be making a two-year stop in England where he will continue researching pop culture and politics, particularly examining the relationship between the rise of the printing press and the British Empire’s expansion. He plans on studying at Oxford University.

“It’s a big steppingstone because of the nature of this scholarship,” he said. “It will give some credibility to my interests because I think sometimes it can be difficult to convince people that popular culture or communications are important to solving major policy issues.

“It is also an excuse to spend some more time being curious for the sake of it, to give me more time to explore areas that I’m interested in.”