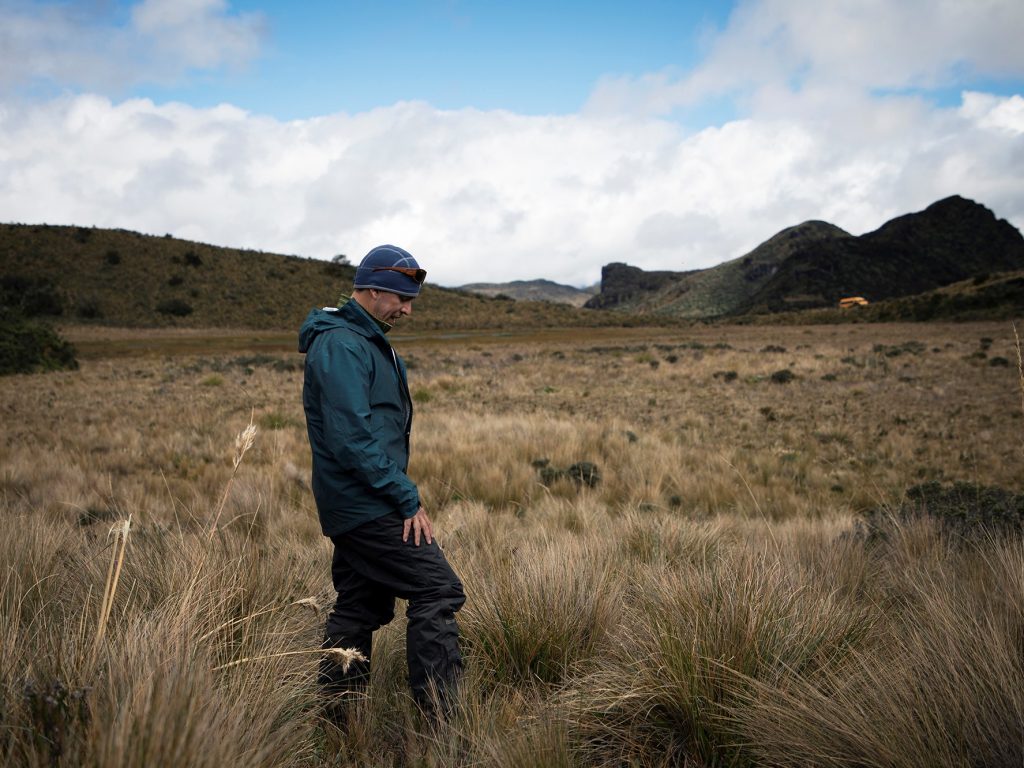 Riveros-Iregui stands at the head of the field site. “I’m amazed by how this project has come together,” he says. “It’s rare. I had a fear it was going to be very chaotic. But it hasn’t been. Little bits here and there, but overall it has gone really well.”

For thousands of years, the northern Andes Mountains have acted as a carbon sink, preserving organic matter as thick soil. As the planet warms, what will happen to all that carbon? This past summer, Carolina undergraduates traveled to Ecuador to take a closer look.

Moss-covered molehills pepper the landscape, each a different shade of autumn. Some are mustard yellow, others evergreen. Upon closer inspection, petite red buds peep through the growth while spindly, finger-like plants called lycophytes grow long and tall on the mounds’ surface. It’s as if a coral reef was scooped up from the ocean, lifted 14,000 feet into the sky, and plopped on top of a mountain.

UNC-Chapel Hill students leap from one mossy hump to another, occasionally overshooting their mark and slipping into the muddy waters in-between. As they stop to catch their breath, quickly exhausted from the high altitude, they drop a sensor into one of the small pools to measure carbon. Between measurements, they look up to admire the dusty white peaks of Antisana, the fourth-highest volcano in Ecuador. Just behind it sits Cotopaxi, once thought to be the highest summit in the world and now one of South America’s most active volcanoes, having erupted more than 50 times since 1738.

Home to 27 volcanoes, Ecuador has accumulated organic matter for thousands of years, as volcanic soils accrue more carbon than any other ecosystem. Called a páramo, this type of landscape is found in the northern Andes Mountains. It’s a tropical environment, but because of the high elevation, the temperature remains low and the decomposition of organic matter slows. Scientists call locations like this carbon sinks—places of long-term carbon storage.

“The carbon content per unit area of soil in this area of the Andes Mountains is among the highest on the planet,” UNC-Chapel Hill geographer Diego Riveros-Iregui says.

In the last three centuries, both natural and human-made carbon dioxide emissions have contributed more to climate change than any other greenhouse gas. It traps heat in the atmosphere, and while there are other gases with more potent heat-snaring ability per molecule than carbon dioxide, they are simply far less abundant. When carbon dioxide is emitted, 40 percent resides in the atmosphere for 100 years and 20 percent hangs around for 1,000. The final 10 percent takes 10,000 years to turn over.

As the planet continues to warm, carbon decomposition rates within the North Andean páramo will increase and release all that organic matter, further heating the planet.

Riveros-Iregui is using his 2019 National Science Foundation Early Career Award, a five-year grant that combines research and education, to better understand these processes. He spent six weeks in Chapel Hill training five undergraduates and a doctoral student on carbon measurement methods within water systems. This past summer, the team spent two months in Ecuador measuring the carbon in a watershed at Cayambe Coca Ecological Reserve. This is the first of three cohorts he will take to South America.

Inland waters like those found in the North Andean páramo are very important in the carbon cycle because they emit greenhouse gases like carbon dioxide and methane at different times of the year depending on how much water is flowing downhill.

“These ecosystems are emitting a lot more carbon than previously thought,” Riveros-Iregui explains. “Given the elevation and mean annual temperature of these tropical environments, these would be sources of atmospheric carbon that are currently unaccounted for.”

These tropical watersheds have never undergone consistent monitoring for this long, and the students involved have never conducted fieldwork—a challenge that entices Riveros-Iregui.