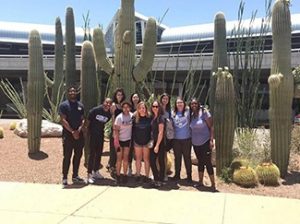 As junior Darian Abernathy stood at the United States-Mexico border listening to a presentation by a medic with Cruz Roja (the Mexican Red Cross), she was captivated by the seven principles emblazoned in red on the speaker’s white vest: humanity, impartiality, neutrality, independence, voluntary service, unity and universality.

While visiting the border between the sister cities of Nogales, Arizona, and Nogales, Sonora, students learned about the suffering witnessed at that space: injuries, illness, rape, hunger, human trafficking.

When Abernathy asked the Red Cross medic if she could take a picture of his vest, he quietly took it off, then gave it to her to keep.

“Tears started streaming down my face. I was so shocked but grateful. All I could do was say, ‘muchas gracias,’” said Abernathy, a native of Hickory, North Carolina, who is majoring in human development and family studies. “Kindness was a theme while we were there. Friends and even strangers would go out of their way to make us feel comfortable.”

This was Abernathy’s second time at the border; for many students it was their first. She was a student leader this past summer for “Navigating Education in Borderlands,” a three-credit-hour study abroad course. The research-intensive, service-oriented experience is a partnership between UNC-Chapel Hill, the University of Arizona in Tucson and the University of Sonora in Hermosillo.

This is the second year of the course; students are supported by the Cumpston Fellowship in the Lookout Scholars Program in the Office of Undergraduate Education. Seven rising sophomores, two returning student leaders and Carolina instructors Carmen Gonzalez, Candice Powell and Carmen Huerta-Bapat spent three weeks in Arizona and Mexico examining the concept of “borderlands” as it relates to students’ first-generation identity. First-generation students make up about 20% of Carolina’s undergraduate student population.

Both the scholars program and the fellowship are made possible thanks to philanthropic support.

The Lookout Scholars Program, created two years ago with support from alumni Sunny and Lee Burrows through their Lookout Foundation, targets approximately 40 incoming first-generation students each year, offering them a rich cohort experience designed to help them become citizen leaders during their four years at Carolina. They take several introductory classes together and have access to faculty, staff and peer mentors and activities that foster success. Gonzalez directs the program.

Rusty Cumpston (mathematical sciences ’83), a first-generation alumnus from Havelock, North Carolina, was inspired by what was happening through Lookout Scholars. He and his wife, Christine, wanted to do something to help. He believes that providing immersive opportunities are essential to preparing students to solve “the significant problems that our state and country face now and in the future.”

He met with some of the students after their first trip in summer 2018 and said he was “blown away by their experiences.”

“The students got a first-person view of the daily realities that are happening at the border. The depth and breadth of the issues they studied were impressive,” Cumpston said. “But the most impactful parts of the trip were the unexpected personal and emotional experiences they had with people who desperately want to pursue a safer and better life in the United States.”

For sophomore Cumpston Fellows Kwaji Bullock of Henderson and Alexandra Domrongchai of Indian Trail, this was the North Carolinians’ first time outside the country. Students engaged in fieldwork throughout the trip — conducting interviews, making presentations about what they were learning and writing a 10-page research paper reflecting on their experiences.

One of the highlights for Bullock was visiting the Tohono O’odham Nation, a reservation of indigenous people native to Arizona and Mexico who live on both sides of the border. Students spent time at the San Miguel Gate border crossing.

“Immigration laws prohibit people of the Tohono O’odham Nation from collecting and receiving goods, visiting their loved ones and other activities that are important to their culture,” said Bullock, who hopes to pursue a business major. “This gave me the indigenous people’s perspective of the U.S.-Mexico border, which is often overlooked.”

Domrongchai said she was grateful for people sharing their stories, no matter how vulnerable it made them.

“An important thing that will always stay with me is ‘without testimony, there can be no advocacy,’” said Domrongchai, a political science and English major. “This experience has helped me to open up more and be proud of the borders within my life and really tackle my own imposter syndrome.”

Gonzalez added: “One of the biggest takeaways for the students is they start to conceive of borderlands not just as a physical space, but a theoretical idea of what it’s like to go through a transition in your life.”

This past spring, Carolina was named a First Forward Advisory Institution by the Center for First-Generation Student Success. Carolina was among only nine institutions tapped to serve in a leadership capacity for its long-standing commitment to supporting first-generation students.

Although the Lookout Scholars and Cumpston Fellows programs are relatively new, Carolina has a rich history of supporting first-generation students. It was recognized specifically for Carolina Firsts, offered through the Office of Undergraduate Education in the College, and Carolina Grad Student F1RSTS, offered within the Graduate School’s Diversity and Student Success Program. Student Affairs and New Student and Family Programs are critical partners for the undergraduate Carolina Firsts.

“It’s a rigorous application process, but Carolina was a no-brainer for us in terms of choosing it as an advisory institution,” said Sarah Whitley, senior director of the Center for First-Generation Student Success. “It was top of the class.”

Carolina Firsts was founded in 2008 to create a sense of community for first-generation undergraduates. Its programs support students through signature events such as a welcome back reception and a graduation recognition and pinning ceremony, as well as advocacy training for faculty and staff. The Carolina Firsts graduation ceremony last May featured the largest attendance yet — more than 200 graduates and their families filled the Great Hall in the Frank Porter Graham Student Union for the event.

A first-generation student herself, Huerta-Bapat joined the program as a graduate assistant in 2012 while completing her doctorate in sociology, then became Carolina Firsts’ program director in 2015. She created the first collegiate honors program in the nation designed specifically for first-generation students; it was lauded by the national first-generation center in a report. Focused not just on GPA, it requires students to complete a number of experiential activities and write a reflective essay as they explore, connect and celebrate their first-generation and Carolina identities.

Participating as instructors for the “Borderlands” course this year was bittersweet for Huerta-Bapat and Powell. Although both left the Office of Undergraduate Education at the end of the summer, they will continue to support first-generation students in new positions at the University. Huerta-Bapat became a teaching assistant professor in the global studies curriculum, and she led a fall honors course called “The Migratory Experience.” Powell became the new director of the Carolina Covenant. Launched in 2004, the scholarship program provides eligible low-income students the opportunity to graduate from Carolina debt-free.

“It’s so important to provide support to these students who are the first in their family to attend college,” said Abigail Panter, senior associate dean for undergraduate education. “We are proud that we are at the forefront among our peers in providing innovative, high-impact educational opportunities for them.”

Senior Viviana Gonzalez’s parents emigrated from Guadalajara, Mexico, to Saxapahaw, North Carolina, when she was just a year old. From an early age, it became her dream to pursue higher education. Today Gonzalez, who is majoring in psychology and pursuing the Spanish for the professions minor, is president of the Carolina Firsts student organization. She hopes to go to medical school to become a pediatrician.

Next May, she and her sister, Alejandra, a dental hygiene major, will become the first in their family to graduate from college.

“I have fallen in love with Carolina so much. It has opened the door to a greater, broader world that I didn’t know existed,” Viviana said. “Because of my education at Carolina, and all of the skills I have acquired, I am becoming the well-rounded person I have always dreamed of becoming.”

Morgan Teeters knows the odds are often stacked against first-generation students — “we’re not as likely to be retained for a second year; we aren’t as likely to graduate, and for some, college is an unattainable dream,” she said.

The junior media and journalism major from Tellico Plains, Tenn., served as a returning student leader for the Cumpston Fellows trip this past summer. She looks forward to the opportunity to be an advocate for people dealing with borders — real and metaphorical — in all aspects of their lives.

“Now, I have the job of sharing what I’ve seen and learned. You can’t understand the idea of borderlands until you’ve been on both sides of that ‘wall’ yourself,” she said. “It’s the job of border-crossers to educate people about existence in both of those spaces.”