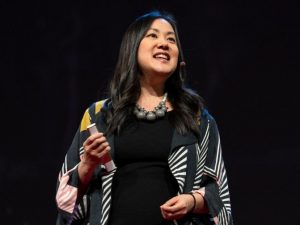 Angel Hsu presenting "How China is (and isn't) fighting pollution and climate change," at TED 2018 – Age of Amazement. (Photo by Bret Hartman/TED)

After her first year of college, Angel Hsu was studying insect-plant interactions in the lowland tropical rain forests of Costa Rica when she realized she wanted to do more than scientific research.

“After spending this amazing summer living in the jungle and doing this research, I was thinking this is all well and great, but what does it really matter if the rain forest is not here in another 10 or 20 years for people like myself to be able to study it?” Hsu said. “So then that really got me interested in policy, and what that really meant, and how I could use policy to help promote conservation.”

Now an assistant professor of public policy and a faculty member in the environment, ecology and energy program at the University of North Carolina at Chapel Hill, Hsu is also founder and director of the Data-Driven EnviroLab, an interdisciplinary research group that innovates and applies quantitative approaches to pressing environmental issues.

Hsu’s summer in Costa Rica inspired her to major in political science in addition to her biology degree at Wake Forest University. After completing her master’s in environmental policy at the University of Cambridge, she sought opportunities to better understand environmental policy. She came back to the U.S. to work for the World Resources Institute, an environmental think tank in Washington, D.C.

“Those experiences really formed my worldview of how I think about what we need to do to really make a difference on climate change policy, which is leveraging science into the policy domain,” Hsu said.

Hsu knew approaching a global problem like climate change required global solutions. She grew up in South Carolina with parents who immigrated to the U.S. from Taiwan but had never felt much of a connection to East Asia. But with China being the most populated country in the world and the largest contributor to global carbon emissions, she realized that to tackle climate change, she had to turn her attention to the country.

“I did this grand pivot, because I saw the need for more Americans like myself to go to China and to learn from them and understand how they view global problems like climate change—what they’re doing, what their priorities and their motivations are, and then being able to translate that back,” Hsu said.

Relations between the U.S. and China are fraught with tension, making global collaboration even more important, Hsu explained.

“If you just get those two countries working together and cooperating, it can really make a huge difference and make a lot of headway in addressing the problem,” she said.

Now, Hsu’s research primarily focuses on the role that individuals, companies and private actors have on climate change. She has found that this approach is often more effective than working with large governments, which can be challenging because they may get deadlocked, or a change in leadership can cause an initiative to stall.

When Hsu was in Glasgow last fall for COP26, the 26th United Nations Climate Change conference, she convened corporate actors and local government networks to discuss the contributions they can make to reduce carbon emissions.

“The question is – how much can those companies and local governments fill in those gaps in action?” Hsu said. “A big part of what I see my job as is actually generating the data and the analysis to hold them accountable.”

Ultimately, Hsu does believe that the international community is moving in the right direction. She sees a lot of promise in the fact that more people aren’t accepting companies’ pledges to reduce carbon emissions at face value.

“They’re simply not going to accept anything less than 100% accountability,” Hsu said.