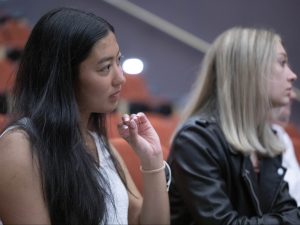 I have enjoyed being in your class and learning about the intelligence community. It has been extremely helpful for me as I continue to figure out what I want to do as a career. Coming into your class I was completely set and focused on becoming a special agent with the FBI, but you have broadened my horizon by teaching me that there are many other agencies out there, each with its areas of expertise.

That’s one of many revelations by Erinn Whitaker’s students who have participated in Carolina’s Diplomacy Initiative. Whitaker brings nearly 15 years in U.S. intelligence to classes that help students see the world and sometimes themselves in new, meaningful ways.

As professor of the practice in the College of Arts and Sciences’ peace, war and defense curriculum, Whitaker is part of the initiative, launched in early 2021 by the Office of the Vice Provost for Global Affairs, in which students not only learn valuable career skills such as researching and writing policy briefs but also make transformative contacts with experienced diplomats.

Led by Barbara Stephenson, vice provost for global affairs and former U.S. ambassador, the initiative delivers on the Global Guarantee — Carolina’s promise that a global education is available to every student — and prepares students to become global leaders.

“The Diplomacy Initiative gives students direct access to foreign affairs practitioners and helps them develop the skills needed to take on global challenges,” said Stephenson. “Building on Carolina’s standout strengths in area studies and the unique peace, war and defense curriculum, the initiative positions Carolina for national preeminence in this arena. Even in the pilot year, we saw students gain the confidence to see themselves in these roles and understand that what they have to contribute will make a real difference.”

At the initiative’s core is a roundtable of faculty who play instrumental roles in the design and implementation of the Diplomacy Initiative. Whitaker and Navin Bapat, professor in the College’s political science department and chair of the peace, war and defense curriculum, are part of the roundtable.

“The initiative is great for students,” said Bapat. “They interact with policymakers and learn through their own research how to engage in diplomacy, how to make peace, how to deal with hard problems and try to separate away from using force. Students think through problems in international politics that can be solved with other instruments besides armed violence, which is an enormous asset.”

Classes have innumerable global issues to study as world events unfold daily. That was the case in Whitaker’s spring 2022 introductory class to peace, war and defense when Russia invaded Ukraine.

The faculty deliver relevant training with academic rigor through assignments such as writing a policy brief.

Whitaker and Bapat assigned their students a policy brief to submit as part of the initiative’s inaugural Policy Brief Competition in spring 2022. The briefs covered issues such as biosecurity, climate threats, human rights and NATO and EU defense policies. Faculty reviewed the briefs and nominated the best work for a final round. Carolina alumni judges who work in international affairs determined the competition’s winners and provided feedback. Winners received a cash prize.

Bapat introduced writing a policy brief as a voluntary assignment in his fall 2021 Terrorism and International Peace class. After some training on what a brief is and does, several students took it on.

“I wanted them to gain a skill set for putting together a policy brief,” he said. “It’s condensed. It addresses the issues around the situation. Policymakers don’t get too much time to read them through, so it must catch your attention and convey a lot of information really fast.”

Some wrote about the Mozambique conflict, others about Mali. “Most people aren’t familiar with those, but the students produced a condensed piece that outlined everything succinctly and would be really useful.”

A group from a class taught by Robert Jenkins, teaching professor in the College’s political science department, won the competition with a brief titled “The Future of NATO Cybersecurity Training: Cyberwarfare Games.” The winning teammates were Paola Andreu, Cordelia Gilligan, Christina Oh and Gabrielle Tedder.

“The most important thing I learned from the experience was how to be critical of programs and entities that I had previously thought were uncontested authorities,” said Oh, a May 2022 graduate who majored in linguistics and minored in Russian culture. “It requires a certain level of confidence, especially as a student, to look at an established intergovernmental organization like NATO and be critical of their policies. That’s what employers are looking for in applicants, and what applicants should look for in employers.”

The students’ preparation and thoroughness wowed the judges.

“The judges spoke about how incredibly impressed they were by the students and their potential. Honestly, I was, too,” Bapat said. “They realized that our students will be able to solve complex problems in the future.”

Whitaker said that writing a policy brief focused on what the U.S. government should do helps students understand national security architecture and the role that policy plays. Students also can think about possibly working in policymaking after graduation.

“Students can include briefs in their writing portfolio when applying for positions in and outside of the government,” Whitaker said.

Entering the world of diplomacy

The initiative prepares students for solving global problems in other ways. In spring 2023, a group of students will head to Washington, D.C., as part of the initiative’s first-ever Washington Week to network and learn from top international affairs practitioners, visit hubs of international policymaking such as think tanks and federal agencies, and connect with students and alumni who share their global interests.

Carolina also welcomes a new Diplomat in Residence this year. Andrew Sisk is a career member of the Senior Foreign Service with more than 20 years of experience with the State Department. He provides advice to students and professionals about careers, internships and other opportunities.

This article was originally published in The Well.