Home / News Stories / During a Pandemic, Strong Public Policy Can Save Lives

During a Pandemic, Strong Public Policy Can Save Lives 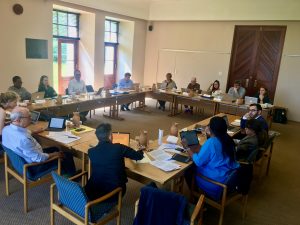 When it comes to a country’s ability to prevent, detect, and respond to infectious disease, strong public health policy can mean the difference between life or death for millions. Benjamin Mason Meier, a professor in the Department of Public Policy at the University of North Carolina at Chapel Hill, knows this all too well. Meier has spent his career studying the World Health Organization (WHO) and national policy responses to major outbreaks of diseases such as Ebola and HIV. Since early 2020, he has worked nonstop on the global response to the novel coronavirus disease, COVID-19.

“Until we come up with a vaccine, millions of lives hang in the balance, and policies will determine what happens,” Meier says.

Meier is analyzing the global policies being implemented to halt the spread of COVID-19. He wants to understand what powers governments have to prevent the disease and what policies are working in the disease response.

Following the Ebola outbreak across West Africa in 2014, Meier served as the technical lead for a multi-year U.S. Centers for Disease Control and Prevention project that analyzed the policy preparedness of affected countries across Sub-Saharan Africa. It was a monumental undertaking. Now, amidst an unprecedented pandemic, the WHO has asked Meier to lead a project assessing policy responses to COVID-19 across countries in the European region, and eventually, the entire world. The project is still in its initial stage, as he works with policy researchers throughout the world to revise his earlier study model to fit this novel coronavirus.

“We’re already seeing that COVID-19 is very different from Ebola in the way it’s transmitted, in the types of policies that are necessary to prevent it, and in the global response,” Meier says.

The project across Europe has a current timeline of about 12 to 18 months. It will focus on the legal preparedness of countries, meaning the capacity of their national laws for effective prevention, detection, and response efforts. The U.S. has already failed in some of these areas, Meier says, like maintaining a national stockpile of personal protective equipment, or PPE, developing and distributing testing protocols for the disease, and providing necessary assistance to allow for social distancing.

Meier won’t be assessing the national laws on his own. The WHO is keen to have expertise inside each county, like lawyers and policy analysts, to help compare the basic authorities of countries. This includes the authority of a country to shut down restaurants and schools.

“This is a disease that poses a global threat,” Meier says. “And yet, the impact will be very unequal across different countries, based on their policies.”

The Chinese response, Meier says, was autocratic and heavy-handed, with the lockdown of entire cities. South Korea responded by testing large numbers and tracing those who were infected.

“Once we got to Europe, we began to see governments that didn’t necessarily have testing in place or have autocratic powers in place, but some of them had far greater health system preparedness for the number of infected patients that would show up at hospitals,” Meier says.

“Policies really are the foundation of building a healthy society. If you don’t have the right policies in place, everything else falls apart,” Meier says. “As we begin to look across countries and see differences in their policy landscape, we’ll begin to identify the policy gaps that lead to the sweeping spread of this disease.”

Meier hopes this study will provide policy tools beyond COVID-19 and support countries through the public health emergencies to come.

“Disease is a common threat to the entire world,” Meier says. “It requires collective action across all countries. And when countries ignore WHO policy guidance, we are all at risk, because the world is really only as strong as its weakest link.”