Haydar on the Radar: Resisting Orientalism and Global Patriarchy 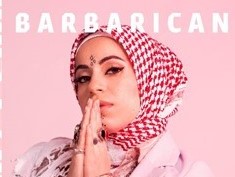 Raised in Flint, Michigan, Mona Haydar is a Syrian-American Muslim who defines herself as a rapper, poet, activist, practitioner of Permaculture, meditator, composting devotee, mountain girl, solar power lover and a tireless God-enthusiast (Haydar 2015). She started her rap career in 2017 with her ground breaking single “Hijabi (Wrap my Hijab),” which quickly gained millions of views and Billboard recognition as one of 2017’s top protest songs and later named top 25 feminist anthems of all time. In 2018 Haydar released her EP entitled Barbarican and continues to release music while actively participating in social justice. This summer, under the guidance of Michael Figueroa, I was able to explore Haydar’s music as an intervention to global patriarchy and contemporary Orientalism by analyzing three of her songs – “Barbarian,” “American,” and “Hijabi (Wrap My Hijab)”.

Throughout her lyrics and music videos Haydar mainly focuses on the experiences of women from colonized backgrounds. She reclaims words such as “barbarian” and “savage,” uses her hijab as a symbol of faith and resistance, and much more. I won’t be talking about my specific findings (read more information), but I will instead focus on my intentions behind this project. Within academia and activism much of the narrative focuses on cisgender, heterosexual, able-bodied men as the objective “true” racial experience of the group. In the particular example of this project, men like Omar Offendum and Narcy can be perceived as more legitimate voices in resistance performance against racism, Islamophobia, and xenophobia. Mona Haydar includes resistance against all of these, but particularly focuses on the experience of Muslim and Arab American women. That is not to say Haydar is the single voice for Muslim and Arab women; she is simply a single voice in the chorus of resistance against Orientalism and patriarchy. There are many other women, queer and disabled folks that are articulating their resistance in a similar fashion.

The best way to finish this post is to leave the reader with a quote by Haydar. In the description box of her song “Barbarian”, she leaves the audience with a letter: I had the privilege to experience Mona Haydar (virtually) through a collaborative event, Muslim Sway: Our Presence x Hip Hop Culture, held by SFU Centre for Comparative Muslim Studies and Open City Events. She performed her song “Barbarian” and answered questions from the audience. I was lucky enough to have her answer my question – “what advice would you give a young Arab-American female college student about to graduate and step into the real world? I want to make meaningful change like you.” She responded to me by saying, “You have something to give to this world. Figure out what it is and give it. It’s your gift, it’s your khidma (service), it is your act of love that Allah put you here for. Once you do it you will feel so fulfilled and satisfied… don’t let people stop you from doing the good work that you are meant here to do.” It wasn’t the first time I had heard of advice like this, but it was the first time I heard it from someone who was like me. Mona Haydar is more than just a rapper. She is a role model.

“Western standards of beauty currently dominate our world because we still live in the imperial model which continues to colonize and enslave. We resist white supremacy, “western” superiority and colonized ways of thinking and being by LOVING ourselves, generously, beautifully and joyfully in spite of any active or subliminal efforts to make us feel unworthy of love and life. If drones dropping bombs and a war economy are civilized then we are proudly not that. We are BEAUTIFUL BARBARIANS, selflessly savage and uncivilized. We eat with our hands. We smell like the spices we love to eat. We love the Earth tenderly as part of ourselves, not separate, not a thing to simply profit from. We love our hair, our noses, our skin and our own ways of thinking and being. We take back terms like barbarian, savage and uncivilized and wear them proudly as we honor our ancestors. We serve Creator by living in harmony with our selves recognizing that we are completely interconnected and in a state of interbeing, always.

Sophia Rekeibe is a queer Arab-Latinx student raised in Rocky Mount, North Carolina. She is an undergraduate double majoring in Music and Sociology with a minor in Latina/o Studies. She is currently the co-director of UNC Music Ambassadors and will be graduating May 2021. Sophia participated this past summer in Moore Undergraduate Research Apprentice Program (MURAP) under the mentorship of Michael Figueroa. Her work examined how Mona Haydar, an Arab-American rapper, is responding to contemporary Orientalism and global patriarchy through her imagery and musical content. She was recently accepted to the 2020 State of North Carolina Undergraduate Research and Creativity Symposium (SNCURCS) and will be presenting her work on Mona Haydar next month.