Home / News Stories / Excavating the Past to Serve the Future

Excavating the Past to Serve the Future 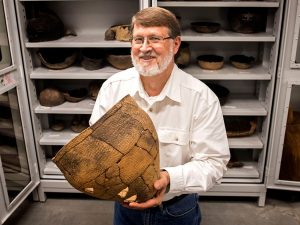 Even after 50 years in the field as an archaeologist, Steve Davis still considers a Native American cooking jar he unearthed as a Carolina undergraduate in 1973 the most important find of his career. The artifact is now one of millions that Davis is responsible for curating as the associate director of Carolina’s Research Laboratories of Archaeology.

The piece encapsulates “the focus of my life’s work — a Native American cooking jar typical of the time but decorated with a musket, the European traders’ weapon,” said Davis. “I’ve been studying the first interactions between Native Americans and Europeans ever since.”

Widely regarded as the preeminent archaeological expert on North Carolina’s late pre-colonial and colonial native peoples, Davis is author and co-author of an extensive catalog of publications, including the book Time Before History: The archaeology of North Carolina. During his 37 years with the University, Davis has overseen the digitization of thousands of artifacts and records to improve access to the University’s collection, excavated previously lost historical sites on Carolina’s campus and devoted his life’s research to preserving the history of Native Americans in the South.

He’s also a great guy, say those who know him as mentor, instructor, boss, colleague and friend. Davis, one of his Massey Award nominators wrote, is a man of “extraordinary competence, humility and joviality” who “will talk for hours about archaeology with a grin on his face.” He “has set a model for collegial, collaborative, engaged research and service,” wrote another.

For all these reasons and more, Steve Davis is one of six Carolina employees to win the 2020 C. Knox Massey Distinguished Service Awards.

Davis found his calling early. “I remember back in third grade when the teacher asked me what I wanted to be when I grew up,” said Davis. “Even then, I knew I wanted to be an archaeologist.”

He enrolled at UNC-Chapel Hill as an undergraduate in 1970 to pursue his childhood dream, but he was unsure about what area to specialize in. Given the opportunity to work in the field for the first time in the spring of 1972, Davis jumped at the chance and helped uncover artifacts dating back to the first encounters between Native Americans and European traders in the Piedmont region of North Carolina.

It was during that early field work that he discovered the cooking jar — an experience that helped define his lifelong research specialty: studying the impact of European colonization on native peoples in Virginia, North Carolina and South Carolina from the 1600s to 1800s.

The art of excavation

Davis describes the process of excavating a historical site the way an artist might explain how to mix new color palettes: The steps are second nature to him but a revelation to anyone outside of his field.

By applying a light spray of water to the ground, Davis can “read” the darker patches where the wooden posts of a structure once stood or the striations in the earth that signal where untouched artifacts may lay hidden. “His beautiful, detail-oriented and neat excavation style is famous,” wrote one of the students who nominated Davis.

But archaeology is far more that finding objects in the dirt, says Davis. It’s a service to those people whose history is documented in every pottery fragment and arrowhead.

“I think archaeology is a discipline that is at its best when it’s giving a voice to those who generally are underrepresented,” he said.

Davis cites as one example the Catawba people asking his research team to locate and excavate ancient burials that were in the path of a highway expansion near Charlotte. He helped the Catawba relocate the graves to a safer location, all in service to the people whose ancestors he studies.

For the University’s bicentennial celebration in 1993, faculty and staff were tasked with finding creative ways that their departments could celebrate Carolina’s history. Davis already had an idea in mind: an excavation on the campus itself.

Davis and his colleagues launched a series of archaeological digs on campus that continued long after the bicentennial, first uncovering the Eagle Hotel that fed and lodged the first students to matriculate at Carolina, then a long brick building — affectionately called “the Poor House” — that once housed students and, most recently, the Phi Delta Theta house, one of two early fraternity houses that survived a fire in 1919 but were demolished soon after.

Davis included students enrolled in archaeology and anthropology courses in the work. He believes that allowing students to uncover the past of their forebears is one way to celebrate the history of the University.

Cataloging for the future

As the associate director of the Research Laboratories of Archaeology, Davis is the curator of millions of artifacts, thousands of photographs and hundreds of thousands of records. He also supervised the decade-long process, beginning in the 1990s, of moving the collection from storage in a Durham warehouse to the current state-of-the-art facility in Hamilton Hall.

Applauding Davis’ vision, one of his nominators wrote: “As archaeologists, we are always thinking about how best to care for past resources. Steve [Davis] is always thinking of future generations of students and researchers and how they will most easily and efficiently access these materials.”

Davis reacted with surprise and characteristic humility after learning he won the Massey Award, one of the University’s most prestigious distinctions for faculty and staff.

“I was dumbfounded,” said Davis. “My impression was that an honor like this would go to someone with much broader reach on campus. I contribute to the University by making my little area, archaeology, the best that it can be, and hope that makes the University a little greater, too.”