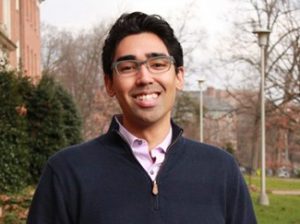 
Aaron Anselmo, is looking for new ways to deliver micronutrients, such as vitamins and minerals, to people across the world.

“Currently a lot of different foods are fortified with micronutrients in the developing world, but some of these fortification approaches don’t address the end use of the product,” he said. “For example, cooking at high temperatures and long times can result in degradation of the fortified micronutrient which then won’t be absorbed by the body.”

Anselmo is currently an assistant professor at the UNC Eshelman School of Pharmacy’s Division of Pharmacoengineering and Molecular Pharmaceutics. His lab conducts research on therapeutic microbes and targeted delivery approaches.

Anselmo’s postdoc research was recently published in Science Translational Medicine, where he was first author. His publication focused on the creation of a heat-stable microparticle formulation to protect encapsulated micronutrients and enable their oral delivery to humans. The work was performed with researchers from the MIT Koch Institute for Integrative Cancer Research and ETH Zurich, and was supported by the Bill and Melinda Gates Foundation.

Anselmo said while micronutrients, such as Vitamin A, are sometimes available in fortified foods, the way they’re currently stored causes them to degrade and they are not optimized to withstand harsh conditions during cooking. Micronutrient deficiencies, which can lead to impaired development and cognitive disorders, are predicted to impact two billion people worldwide.

He wanted to develop a technology that could be used with any type of food, and wouldn’t be subject to degradation from sunlight, humidity, or during cooking. The study in Science Translational Medicine focused on developing a heat-stable particle for oral micronutrient delivery.

The research team created polymer-based microparticles that could store 11 different micronutrients. The study found that increasing iron loading and decreasing polymer content in the microparticles led to higher iron absorption in humans.

Anselmo said the next step for this research is to evaluate the technology in a target population, hopefully implementing a clinical trial in a specific country where micronutrient deficiencies are prevalent. In the future, he also hopes to use similar methods to encapsulate other payloads, such as probiotics.