Home / News Stories / Forging Her Own Path with a Dual Degree

Forging Her Own Path with a Dual Degree 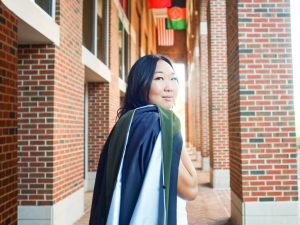 Grace Yook (MBA/PharmD ’21) is a trailblazer. In 2021, she was the first Asian woman and the first woman of color to graduate from UNC Kenan-Flagler’s dual-degree program with the UNC Eshelman School of Pharmacy, and she’s used her experience on the combined MBA and PharmD to forge her own career path.

It is a path that she knew from early in her college journey would end with a position in healthcare. Yook majored in biological sciences and chemistry at Wake Forest University before arriving in Chapel Hill, and she knew she wanted to pursue a rotational program with a pharmaceutical company post-graduation.

The combination of an MBA with a PharmD degree seemed like the best way to get there. Having grown up in North Carolina, it was a a “no-brainer” to study at the University of North Carolina at Chapel Hill where the pharmacy and business schools are ranked among the best in the U.S. She earned a UNC Kenan-Flagler Merit Fellowship, a Consortium for Graduate Study in Management Fellowship and a Rankin Memorial Fellowship, among other honors.

Though she knew her destination, Yook couldn’t have predicted the route that her MBA at UNC Kenan-Flagler would take her, nor how it would alter her perspective.

“What I didn’t realize was that because the business school is so diverse, and has so many different types of people, I was able to learn a lot about myself and what my interests were long term,” Yook says.

As well as expanding her horizons through talking with her classmates, she also explored new interests and markets by taking a Global Immersion Elective (GIE) to explore the dynamic entrepreneurship environment in Vietnam, Thailand and Singapore. Students interacted with business leaders in venture capital, online retailing, blockchain, tech and education startups, government and an NGO.

“I was really interested in going to Southeast Asia,” Yook recalls. “The GIE was entrepreneurship focused, which was obviously completely outside of healthcare.”

Learning to think like an entrepreneur was a fascinating journey, and Yook found a way to combine her new interest with her existing passion.

“I organized an all-female-led venture capital panel in Thailand,” she says. “They were a telemedicine psychiatric service, which was cool because it melded my healthcare interest with venture capital and entrepreneurship.”

Yook went on to participate in the UNC Kenan-Flagler Venture Capital Investment Competition. Her team won first place in both the internal and regional events and fifth place the global VCIC event. There, she talked with healthcare entrepreneurs while taking a role as a venture capitalist, which helped her to see healthcare from a whole new perspective. She later mentored female MBA students to encourage them to compete in the event and served as a VCIC judge.

“I knew there would be enhanced avenues for discovering where healthcare sits within the scope of business, but I didn’t realize how great it would be to explore venture capital and entrepreneurship through global opportunities,” says Yook.

One of the other key moments of Yook’s experience was meeting Vickie Segar (BSBA ’05), founder of Village Marketing, an influencer-based marketing company in the healthcare space, in a healthcare marketing class at UNC Kenan-Flagler. She ended up working for Segar part-time as a marketing consultant while she was a student, gaining valuable experience that she could take forward into her future in healthcare.

She interned at top companies Biogen, GSK and Bristol Myers Squibb, and ended her degree on the threshold of the destination she set out for: She joined a rotational program at pharmaceutical company Bristol Myers Squibb. There she is a manager in COVID mAb commercialization.

The role gives her the cross-functional experience she’s been looking for, and the chance to use the PharmD clinical experiences. It will also, crucially, allow her to flex the enhanced business skillset she honed earning her MBA.

“I think the program helped me realize that you shouldn’t necessarily confine yourself to one path,” Yook says. “I think being curious and trying out different things will enhance your craft.”

A community that embraces uniqueness

Overall, Yook believes that UNC Kenan-Flagler was the right place for her to forge her career path.

“The path I wanted to build was one that was focused on my unique perspective – I was the only dual-degree PharmD MBA in my year, and I liked that because I brought a diverse skillset to the classroom,” she reflects.

Not only did the environment at UNC Kenan-Flagler allow Yook to embrace the uniqueness of her professional perspective, but she felt that the community embraced her as an individual.

“There was a strong network of women-based groups, particularly at UNC Kenan-Flagler,” she says. She felt supported both as a Korean American and as a woman in business in bringing her opinions to the table and being heard.

Her advice to students is to be bold and take initiative.

“At UNC Kenan-Flagler, they want to do the best they can for their students,” Yook says, “but it’s up to you to build your own opportunities and build out what you want your path to look like.”