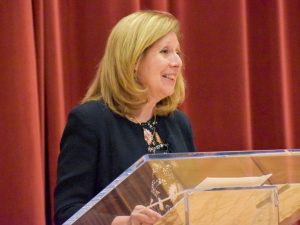 Ambassador (Ret.) Liliana Ayalde believes that risks, passion, language-learning and diversity are vital attributes to the makings of a strong leader in the world of foreign affairs. Ayalde, former U.S. ambassador to Brazil, spoke about the skills and wisdom she has gained in her 38-year diplomatic career at “Careers in International Affairs & Global Development,” a Diplomatic Discussion held Feb. 15 at the University of North Carolina at Chapel Hill’s FedEx Global Education Center.

During her Q&A with Peace, War and Defense Chair Navin Bapat, Ayalde emphasized the constant need to learn and collaborate with others in foreign affairs, development and security roles “because you’re moving from global issue[s] to global threats,” she said.

When working towards goals such as joint development and policy initiatives with other countries, Ayalde believes there is great benefit in gaining multiple perspectives. For example, by working alongside the military, Ayalde said that she gained insight into how the military thinks, plans and prepares, as well as how foreign policy ties into defense cooperation in anti-corruption work.

Part of the reason why Ayalde knew she was suited for a career as an ambassador was her ability to work in a team. “I feel very good about creating teams that feel empowered,” Ayalde said.

In her work with the United States Agency for International Development (USAID), Ayalde learned the importance of cooperation and communication.

“It doesn’t matter what kind of environment you’re in – you have to respect the culture and learn to listen,” Ayalde said. “You have to listen, because you’re there as a guest.”

Ayalde also emphasized that diplomatic work often comes with uncertainty. “If you’re someone that likes continuity and knowing what happens next, global affairs is tough,” Ayalde warned. However, she explained that with great challenges come many opportunities to be a part of the solution.

“The global issues we face today have no boundaries,” said Ayalde. “There is a role for everyone.”

That sentiment is integral to Carolina’s Diplomacy Initiative, which expands opportunities for Carolina students and faculty to learn and teach about the role of diplomacy in solving global challenges.  Ultimately, the initiative seeks to better prepare Carolina students to become the next generation of global leaders.

“UNC, with standout strengths in area and language studies and the unique Peace, War and Defense curriculum, is poised to be a top-tier producer of global leaders — including diplomats, foreign policy professionals and national security experts,” said Barbara Stephenson, vice provost for global affairs. “The new Diplomacy Initiative builds on and compliments those strengths as it brings foreign affairs practitioners to Carolina to engage directly with students.”

Diplomatic Discussions is an ongoing event series that brings top international relations practitioners to the UNC-Chapel Hill campus – virtually and in-person – to connect with students, share career advice and give students unique access to the world of diplomacy.