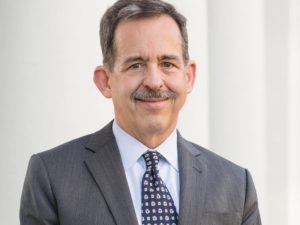 Former ambassador to Poland (Warsaw) Stephen Mull visited the University of North Carolina at Chapel Hill from Oct. 12-13 as part of the new Diplomacy Initiative launched by the Office of the Vice Provost for Global Affairs (OVPGA). Mull met with students, taught a class and gave a talk on Poland’s political journey from communism to democracy, to a more challenged and less liberal version of democracy today. One of the U.S. Department of State’s leading experts on U.S.-Poland relations, Mull retired from the State with the personal rank of career ambassador, the highest rank in the U.S. Foreign Service. He now serves as vice provost for global affairs at the University of Virginia.

Mull, who served as U.S. Ambassador to Poland from 2012-2015, described a “growing divergence” between Polish elites who benefit from an increasingly globalized Europe and the rural majority of Poland, “those who fell behind,” who carry “… a lot of seething resentment of the people who have succeeded in the new system,” said Mull.

The resentment felt by rural Poles was a major contributing factor in the 2015 election, he explained. “Poland is a raucous democracy, a very vibrant democracy, that has gone through many changes of government since 1989,” said Mull. “But in 2015, it started to go through probably the most consequential of all since 1989, with the election of President Andrzej Duda from the Law and Justice party.”

Mull described increasing politicization of the public sphere in Poland due to the appointment of Law and Justice party loyalists in roles that were previously nonpartisan, such as judges. In addition, Mull noted the Polish Constitutional Tribunal’s ruling that European Union (EU) law could not be superior to Polish law, causing major tensions between Poland and the EU.

Despite Poland’s democratic backsliding, Poland and the U.S. have a mutually beneficial relationship as both nations seek to counter Russia. Mull pointed out that European disunity has previously presented itself as an opportunity for Russian interference.

During Mull’s tenure as an ambassador, he helped negotiate Poland’s membership in NATO. U.S.-Poland relations are even more crucial considering Poland’s role as the largest NATO country in Eastern Europe.

“Poland has been a really good [U.S.] ally for most of 30 years,” said Mull. “It’s a relationship that’s worth keeping and improving, but we’ve got to be patient, principled, pragmatic and smart about how we go about it.”

On Oct. 13, Mull met with students in the Global 490 course taught by Graeme Robertson, professor of political science and director of CSEEES, and Sam Greene, director of King’s College London’s Russia Institute. In advance of the meeting, the students listened to an episode of The General and the Ambassador, a podcast produced by the American Academy of Diplomacy in partnership with UNC Global, in which Mull describes his work in Poland. Together, they discussed the relationship between Poland and Russia. Mull also participated in a lunch at the FedEx GEC with students studying Polish language.

“Ambassador Mull’s visit gave UNC students a unique, first-hand perspective on Poland’s shifting political landscape from his work there as a senior American diplomat,” said Barbara Stephenson, UNC-Chapel Hill’s vice provost for global affairs and former ambassador. “His visit also gave Carolina students insights into how diplomacy works and showed the value of deep language and area studies. He helped our students understand what it’s like to be a diplomat on the ground, helping write history by having a direct role in helping Poland join NATO, a development of enormous consequence.”

This visit was sponsored by OVPGA in partnership with CSEEES.