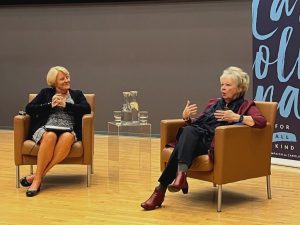 In a discussion at the University of North Carolina at Chapel Hill, former U.S. Ambassador Mary Yates warned of the dangers of forgetting about the African continent on the world stage.

“Our disengagement is noted,” Yates said. “Since 2010, U.S. trade with Africa has decreased by more than 50 percent, and U.S. presidents have made just two visits.”

Yates, who served for decades in the American Foreign Service across the African continent, discussed the diplomatic challenges facing future global leaders on March 22 at the FedEx Global Education Center as part of Diplomatic Discussions, a speaker series hosted by the Office of the Vice Provost for Global Affairs (OVPGA).

“Today, the word diplomacy is used in many different ways, but it is fundamentally the tactful management of human relationships,” Yates said.

As U.S. ambassador to both Ghana and Burundi and chargé d’affaires in Khartoum, Sudan, Yates built expertise on conflict resolution, peacebuilding, democracy promotion and humanitarian affairs. She finished her 30-year diplomatic career in 2011 serving as special assistant to the president and senior director for African affairs at the White House National Security Council.

Yates said that the U.S. must focus its diplomatic efforts in Africa in three areas: democracy, conflicts and youth. She added that to promote democracy abroad, the U.S. must provide a strong example at home.

“Democracy will likely lurch forwards and backwards in Africa, like elsewhere in the world,” Yates said. “I sincerely believe it is just one more reason that America cannot let our democracy fail.”

Yates described how her experiences on the frontlines of genocide led her to practice preventative diplomacy throughout the rest of her career. As a political officer and public affairs counselor in the Democratic Republic of the Congo, Yates reported on the aftermath of the 1994 Rwandan genocide for the American embassy.

“What I witnessed is still seared in my brain,” Yates said. “I had to capture the intensity of hatred to try to explain how this happened.”

She said she wanted to prevent such violence from ever occurring again. Yates had the chance to use preventative diplomacy as ambassador to Burundi during the country’s civil war, which lasted from 1993 to 2005.

“I learned quickly that diplomats alone cannot end wars for sovereign nations,” Yates said. “We can help by convening and encouraging peace and identifying steps towards that peace. But it is slow, hard work.”

The importance of sincere, genuine listening is invaluable to diplomacy, Yates said. She noted the complex challenges facing the next generation of global leaders, including democratic backsliding, economic inequality, climate change, cyber security and disease.

“You are the first generation who, for two years in lockdown, experienced in person that the fate of everyone—all 7.7 billion people in 195 nation states—is truly linked,” Yates said. “Think about all you are going to teach the next generations. You can be the generation that rebuilds and restores so much.”

Yates noted that a new generation faces great challenges ahead, such as climate change and technology. She encouraged students to get involved in the issues that matter to them.

“I hope my snapshots of African trends and my experiences have shown the changing nature of an extremely complex and magnificent continent,” Yates said. “When I meet with young people like you, I believe that these challenges can be met and solved.”

“I think it’s so amazing to hear all of their stories, especially with the diversity of their careers,” Sampson said.

Yates’ talk was hosted through OVPGA’s Diplomacy Initiative, which seeks to expand opportunities for Carolina students and faculty to learn and teach about the role of diplomacy in solving global challenges.