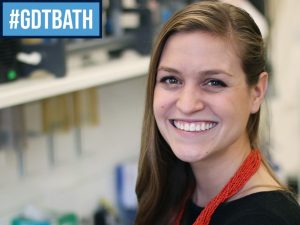 A graduate student at the UNC Gillings School of Global Public Health, Alyssa Grube honed her research skills by spending her summers at the Galapagos Science Center where she studied antibiotic-resistant bacteria in the environment.

When Alyssa Grube first began her graduate studies at the UNC Gillings School of Global Public Health four years ago, she had the option to work on two research projects: one on hog farms and the other in the Galapagos.

It was an easy answer then, and after four summers of studying at the Galapagos Science Center, she’s positive she made the right call.

“It’s pretty surreal,” Grube said. “It’s pretty cool at the end of the lab day to be able to walk out directly onto the beach.”

It wasn’t just the backdrop that made the Galapagos the perfect fit for Grube. As a microbiologist studying antibiotic-resistance in bacteria, conducting research at one of the most pristine places on Earth provided the perfect environment to understand how humans introduce antibiotic resistance into the environment.

“The Galapagos is a really unique system because it is a protected ecosystem. The human settlements are restricted to 3% of the landmass, meaning the Galapagos National Park protects the remaining 97%,” Grube said. “For this question of antibiotic resistance, that’s key because we have this gradient of really intense human impact that we can then compare to areas with minimal to no human impacts over really a short geographic scale. It’d be difficult to replicate that contrast anywhere else in the world.”

This unique research opportunity began taking shape when Grube was a high schooler in Lancaster, Pennsylvania, and first became fascinated with the aspects of science that you can’t see.

“I remember sitting under my tree thinking about all the molecular machinery involved in photosynthesis and how impactful it is to the entire world and how impactful these small invisible things are to the life we have,” she said.

Her piqued curiosity led her to Juniata College to study biology on a pre-med track. But after watching stitches being removed from an incision and realizing that medical school was not the right path for her, she began pursuing more research and ended up at Carolina as a summer undergraduate research intern in Rita Tamayo’s lab studying cholera.

Every Friday during that internship, Grube attended lectures by the Gillings School’s epidemiology department. Though largely drawn to the talks by the free bagels and coffee, the discussions reinvigorated her interest in environmental microbiology and its application for public health issues.

After working in a research lab in Chile as a Fulbright Scholar, Grube returned to Carolina again in 2016, but this time as a graduate student in the Gillings School’s environmental science and engineering department to work with professor Jill Stewart, an expert in the links between ecosystems and human health.

Before even settling down in Chapel Hill, Grube began her work at the Galapagos Science Center — jointly operated by UNC-Chapel Hill and Universidad San Francisco de Quito in Ecuador.

Grube worked on a research project that examined water quality in the islands during her first summer in the Galapagos. She helped collect samples, analyzed them back at the center’s lab and later even presented the project’s results at a Galapagos symposium entirely in Spanish.

“Water quality is notoriously challenging in the Galapagos because it’s an island system in the middle of the pacific, and freshwater is hard to come by,” she said. “San Cristóbal is the only inhabited island that has a permanent freshwater body.”

Though the islands do have efficient water treatment facilities, freshwater cannot be pumped to citizens on a 24-hour basis, so community members store water in containers at their home — sometimes for longer than a day, which can lead to people drinking contaminated water.

The following three summers she conducted her own research on antibiotic resistance by tapping into the water quality research’s connections. The work examined what Grube considers among the world’s biggest public health problems.

“Antibiotics are key to daily life and the advancement of modern medicine — things like hip surgeries and C-sections would be impossible if we didn’t have effective antibiotics to prevent infections post-operation,” she said. “If we start not being able to treat things like ear infections, then it becomes a problem.”

Although researchers know how antibiotic resistance in humans is leading to superbugs that are resistant to antibiotics, what it means for the environment and wildlife is more unknown. Grube’s research explored how humans contribute to antibiotic-resistant bacteria in the environment, with the aim of disentangling background and anthropogenic sources of resistance. Grube hopes this research will also add to our understanding of zoonotic disease transmission — the transmission of disease to different specifies — under a “One Health” framework.

The work took her not just to the Galapagos Science Center labs but also back out into the field to collect samples from marine iguanas, land iguanas, giant tortoises, and sea turtles, red-footed boobies and sea lions.

As she wraps up the research and prepares to graduate with her doctoral degree this spring, Grube is already looking for the next public health issue to take on. And though she doesn’t know what that next challenge is just yet, Grube knows she’ll dive into it with the same curiosity she had in her high school biology.

“I want to understand more and how these systems work,” she said. “It’s the same drive of being a dorky high schooler outside reading my bio book with curiosity.”