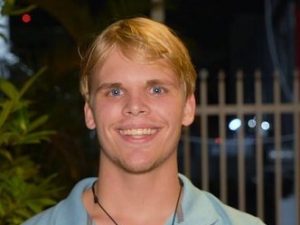 Aside from a few short trips on the East Coast, Cade Rodgers rarely had the chance to venture outside of his hometown of Salisbury, North Carolina.

Leaving Salisbury to come to UNC-Chapel Hill last fall, Rodgers said, was essentially a culture shock. He met people from other countries and cultures for the first time. He heard new languages and became friends with people whose upbringings were different from his.

Rodgers’ exploration of the world outside his hometown took another step forward over winter break when he had the opportunity to travel farther than he’s ever ventured before: to Puerto Rico.

“When I saw that I could have an opportunity to spend an entire week in a completely different place surrounded by a different culture, I was like, ‘I have to apply,’” said Rodgers, who is majoring in physics. “I’m so grateful that I did.”

Carolina’s Global Take Off: Puerto Rico sends students with financial need and limited to no travel experience to Puerto Rico for a fully funded, five-day experience.

“It’s a really academically enriching experience,” said Brandy Arellano, program manager at the Center for Global Initiatives. “It gives the students a level of self-awareness and self-confidence that they didn’t have before.”

That was certainly true for Rodgers, who said the winter break trip introduced him to an entirely new way of thinking.

Global Take Off is just one of many Center for Global Initiatives programs that help underserved and underrepresented Carolina students access global opportunities. While Puerto Rico is a U.S. territory, Arellano said the experience is global in nature, exposing students to diverse cultures and perspectives.

And while the trip itself is short-term, the program begins months before departure. The Center for Global Initiatives coordinates predeparture orientation sessions and teaches students about Puerto Rican cultures and politics.

“We start by introducing them to some of the academic concepts, so we talk about social identity, history, race, religion,” Arellano said. “But we also spend a lot of time going over logistics and fears about travel. We want them to feel like even though it’s all going to be new, they can manage it, and they’re not doing it alone.”

During this year’s trip, Rodgers and 13 other students from both Carolina and Fayetteville State University met local community leaders, exchanged experiences with Puerto Rican college students and tried their hand at the Bomba — a traditional, Afro-Puerto Rican dance.

After the trip, the Center for Global Initiatives helps students reflect on their experience and take their next steps. Arellano said many students go on to pursue other global opportunities they might never have previously considered, from study abroad programs to prestigious international scholarships.

“It puts them on a springboard for these larger opportunities later,” she said.