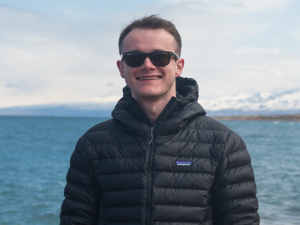 Lucas Risinger first became intrigued by Russia’s history and culture in high school when his history class was learning about the Cold War. When he arrived at Carolina a few years later to study economics and math, he continued to follow his interest in Eastern Europe by enrolling in a Russian language course in the College of Arts & Sciences.

“I was like, ‘I’m going to try Russian for a semester or two and see if it clicks with me,’” he said. “And then I ended up dedicating the rest of my college time to it. It was very unexpected. It was that freshman year of getting immersed into the department. It’s a tight-knit group. I just really fell in love with it.”

Since that first-year course, Risinger added a Russian minor and has traveled to Moscow and Russian-speaking Georgia to sharpen his language skills and immerse himself in the culture. And for the past two semesters, the Carolina senior has participated in the University’s Russian Flagship Program.

Risinger is among the three Tar Heels studying at Kyrgyzstan’s American University of Central Asia this year, including spending the spring semester with host families in Bishkek to study in person. The students will soon head to Kazakhstan to complete summer internships in another Russian-speaking county.

The experience is part of the UNC Russian Flagship Program, which was launched in 2020 and funded by the Department of Defense’s Flagship Language Program to allow students of any academic background to intensively study the Russian language and participate in professional development programming tailored to each student. Carolina is home to one of only eight Russian Flagship Programs in the United States. With the Russian invasion into Ukraine this spring, the program can serve as a tool for developing language and cultural skills to help promote peace and security.

“It’s an opportunity for any major to acquire Russian to an extent to which you can live and work in the language,” Risinger said. “It is truly for anyone who studies Russian to whatever capacity to actually get to that fluency level.”

In addition to the language courses and tutoring, the program features a capstone academic year that allows students to study and intern in Russian-speaking countries.

Risinger joined the UNC Russian Flagship Program during the fall semester of 2020. With plans on graduating that following spring, he was already applying to graduate school. But after spending two or three hours a day preparing for rigorous Russian language tests over his winter break, Risinger put his graduate school program on hold to take part in the capstone year and was awarded the Boren Scholarship for the Language Flagship for his program abroad.

The students were initially slated to spend the year in Almaty, Kazakhstan, to study at the Al-Farabi Kazakh National University. But when protests in the area led to political unrest, the program shifted to Kyrgyzstan — still a Russian-speaking country, but one Risinger knew much less about.

“Since then, I’ve been living with a host family, going to classes all day and preparing for a summer internship,” he said. “We’ve made tons of friends locally. I have absolutely loved my time.”

The semester abroad, Risinger said, has led to major progress in his language skills.

“We are much more able to speak professionally, write professionally and speak casually. I was remarking to my tutor that I spent five hours with Kyrgyz friends, speaking 100% Russian. That is not something I could have done without his program,” he said. “The idea of waking up and speaking Russian to everyone, except maybe your family or friends at home, is daunting, but it is what makes the program worthwhile to me.”

Although the Tar Heel and his fellow Carolina students in Kyrgyzstan are fully immersed in the culture, Risinger said the group from Chapel Hill have served as “massive security blankets” for each other as they navigate a new country. He is joined by Griffin McGuire and John Kolodich for the capstone year.

“It is comforting knowing that these are people with your life experiences, with your inside jokes and your knowledge of the Russian program at UNC,” he said. “It really relieved a lot of the anxiety that I had coming here.”

As the semester winds down, the three Tar Heels are preparing to head to Kazakhstan for their summer internships. Risinger, who is interested in a career in economic development in Eastern Europe, will be interning with an international development fund focused on Central Eurasia. He’ll be working 40 hours a week — entirely in Russian — and present a final project at the end of the summer.

Risinger will graduate from Carolina over the summer and then immediately head to Boston to begin his master’s program at Harvard, where he will continue studying Russia and Eastern Europe to prepare for his career working in the region.

The UNC Russian Flagship Program and his time abroad, Risinger said, are two big reasons his career path is an option.

“I’m not only getting the language skills to work in Russia and Russian regions, but also the cultural knowledge to be able to do so,” he said. “That’s something I noticed in Georgia. While I understood the Russian and could speak back, I felt like I was missing out on a whole lot of cultural cues. I think that the Flagship Program has helped that go away. So it’s feeling much more comfortable navigating the region, not just from a language perspective, but from a human and business one as well.”

This story was originally published by UNC.edu