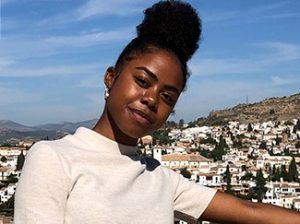 The global studies major from Winston-Salem was determined to stay out of her comfort zone and instead immerse herself in the language and culture as she expanded her horizons.

“I’m focusing on living more independently in an unfamiliar environment with a language barrier and a culture different than my own,” she said from Spain last fall. “I truly believe that immersion is the best way to advance your language learning rather than just the classroom. It has been challenging – but exhilarating.”

Singleton, who minors in Hispanic studies and public policy, was intentional about building relationships with the local community and with other international students, learning how to connect with strangers through a language that she’s grown to love but didn’t yet fully comprehend.

“On my first night, I went to a party and met many people from all around the world – France, Italy, Germany, the Netherlands. I was able to make friends with them and communicate via our shared second language, Spanish, though it was unfamiliar,” she said. “In that moment, I completely understood the importance of learning languages other than your own and expanding your ability to communicate with others.”

Singleton is a Duncan MacRae Public Policy Scholar at Carolina, which has allowed her to learn about how policy is used around the world and how it informs international relations. Last year, she had the opportunity to attend the Public Policy and International Affairs program at Georgetown University where she met other scholars, government officials, ambassadors and educators who have been able to use skills in analytics, theory and application in international work.

Stateside, Singleton is a mentor at the Refugee Support Center, an organization that provides resources to local refugees in the Chapel Hill area, which she says allows her to be a better global citizen from home. There, she mentors and tutors a young girl who now feels like family.

“I play a vital role in her life, helping her navigate life, academics, social issues and simply guide her to be a good human being. I’m also a steady source of love, care and support. I think it important to acknowledge the refugee community, and the adversity they face should be brought to the table more often. I hope to continue to work with refugees at some point in my career journey and carry these personal stories with me.”