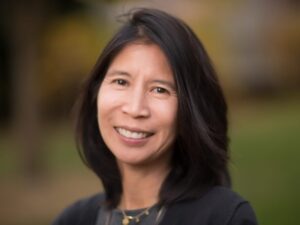 Vivian Go is a professor in the Department of Health Education at UNC's Gillings School of Global Public Health.

Vivian Go, is a social epidemiologist who designs, implements and evaluates HIV interventions among marginalized populations in Asia. She has worked for more than 20 years in Vietnam, and both a recent scientific publication and large grant from the National Institutes of Health (NIH) represent the continuation of her efforts to prevent HIV infection.

Studying the Relationship Between Alcohol Use and HIV Viral Suppression

A professor of health behavior at the UNC Gillings School of Global Public Health, Go is first author of the article, “Effect of 2 Integrated Interventions on Alcohol Abstinence and Viral Suppression Among Vietnamese Adults With Hazardous Alcohol Use and HIV: A Randomized Clinical Trial,” which was published online by JAMA Network Open.

In the study, Go and an international team of researchers conducted an intervention among 440 people living with HIV (96.8% men) in Thai Nguyen, Vietnam, who were receiving antiretroviral therapy (ART) and also exhibited unhealthy alcohol use. A three-group, randomized control trial examined the effects of two interventions combining cognitive behavioral therapy and motivational enhancement therapy with varying intensity.

After a year, patients in the groups that received either brief or extended therapy were, on average, abstaining from alcohol on 65% of days. Patients in the control group were abstaining, on average, on 50% of days. What’s more, the HIV virus was better suppressed in the brief therapy group versus the control group and the extended therapy group.

“[The mostly male study population] was expected, given that 65% of [people living with HIV] are men and most individuals with alcohol use disorder in Vietnam are men,” the researchers wrote. “Therefore, we anticipate that our findings will generalize to our target population in Vietnam, although they may not be generalizable to other contexts in which women account for a greater proportion of people with HIV and people with alcohol use disorders.”

The National Institutes of Health has continuously funded the UNC Institute for Global Health and Infectious Diseases HIV research unit since 1987, making it one of the most experienced Global HIV Treatment and Prevention Clinical Trials Units (CTUs) in the world.

Vietnam was added as a new site in this latest funding cycle, as the Asia-Pacific region has concentrated HIV epidemics among key populations, including people who inject drugs and men who have sex with men. Over the past 20 years, Go and her team have established a permanent UNC office in Hanoi and two project offices in Thai Nguyen (40 miles north of Hanoi). These locations are staffed with 20 full-time Vietnamese nationals who have been trained to conduct large research trials, led in Vietnam by Dr. Tran Viet Ha, an assistant professor with the Gillings School’s Department of Health Behavior.

As the overall CTU Vietnam site leader, Go will focus on scaling up evidence-based interventions into routine practice and implementing HIV/AIDS treatment prevention and cure research. Over the next seven years, she and colleagues envision an expansion of their work in Vietnam.

“With the support of the UNC Institute for Global Health and Infectious Diseases and our many Vietnamese collaborators, including the Vietnam Ministry of Health and Hanoi Medical University, we hope to continue building our operations in Vietnam into a true global academic center built on the foundational pillars of research, teaching and service,” Go said. “To this end, we plan to expand our research portfolio to include the prevention and treatment of Hepatitis B virus, Hepatitis C virus, tuberculosis, mental health and other HIV co-morbidities; enhance research capacity with universities and policymakers in Vietnam through training grants for Vietnamese nationals; and build more opportunities for UNC students to gain both research and clinical field experience in Vietnam.”