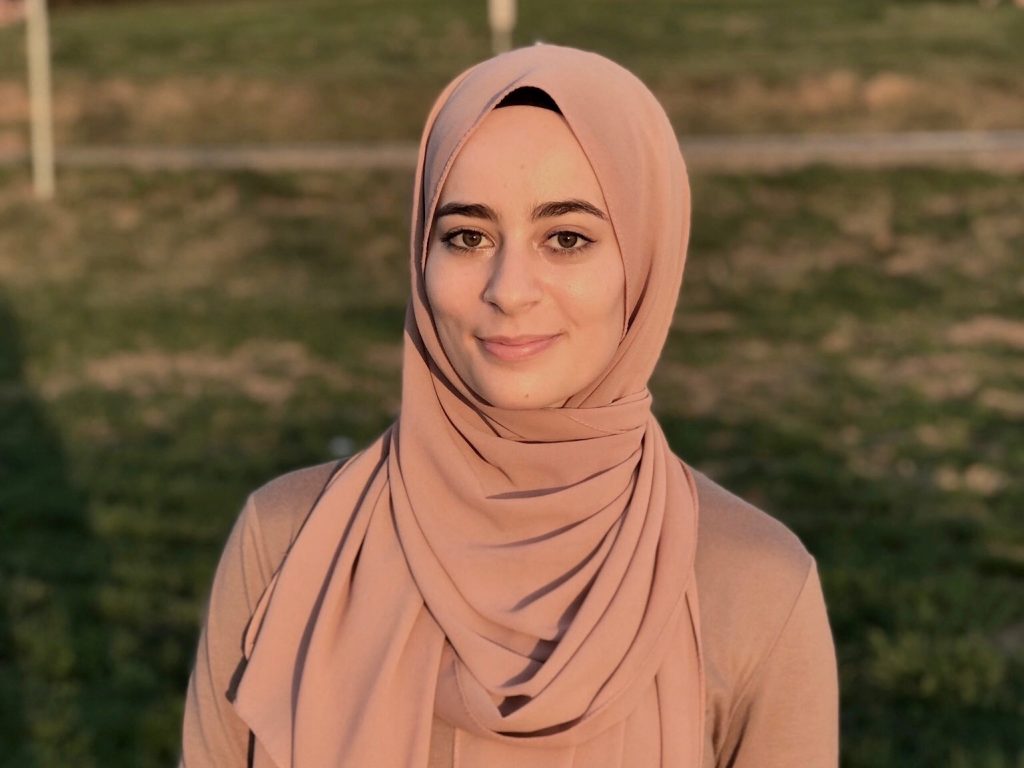 The notion of returning to a better Syria drives Hiba Alzouby ’21, a doctor of pharmacy candidate at UNC Eshelman School of Pharmacy. Born in New Jersey and raised in Charlotte, North Carolina, Alzouby lived in Syria between the ages of 5 to 10 and considers it a second home. While living there, she traveled to neighboring countries like Jordan and Turkey.

“I think that global experience was so essential to growing up,” she said. “It was really part of my formative experience because you get this outlook that you wouldn’t get otherwise.”

Alzouby shared her global experience by submitting “Home We’ll Go” to the 2018 Carolina Global Photography Competition, for which she won first place. She took the photo during her junior year of high school while volunteering with the International Relief and Development program at the Zaatari Refugee Camp in Jordan, the largest Syrian refugee camp in the world.

“Home We’ll Go” features two girls holding on to one another and walking in the refugee camp — although due to the sand and sun that blocked her vision when she took the photo, it wasn’t until months later that Alzouby realized she had captured more than a snapshot of the camp’s landscape.

“My experience in Zaatari opened my eyes to the educational crisis and the dire lack of opportunities for students and young people who have ambitions of becoming productive members of society and rebuilding their home country,” she said in her caption for the competition. “As bleak as Syria’s future may seem, there will always be hope, and that is found in the children who will one day go back and make a better Syria.”

In 2014, Alzouby decided to volunteer in Jordan in response to the civil war that started in Syria in 2011. Her family members were some of the first Syrians to flee to the camp, located on the border of Syria and Jordan, and she wanted to see them and help out.

While volunteering, Alzouby helped college-aged refugees apply for scholarships through the International Relief and Development program. This gave 40 students whose chance at an education seemed lost when they had to flee their homes the opportunity to pursue one. Fluent in both English and Arabic, Alzouby translated for students and helped them fill out their applications.

“I got to interact with a lot of people, and a lot of them were my age. I came back and started applying for college, and I … reflected on how I viewed the process as being so difficult, but I knew I was at least guaranteed to go to school at the end of the day,” Alzouby said.

Alzouby hopes to return to Syria one day. The experience helped her reflect on her own privileges and luxuries in life, like accessible water and nice weather. She said since she last went, the weather has gotten worse, and the camp has become more crowded.

Because of her own formative experiences, Alzouby thinks global experiences, speaking more languages and getting out of one’s comfort zone can help change preexisting beliefs and build an understanding of our differences.

“If you stay in your own bubble, you’re not going to learn anything. Having those kinds of interactions are going to broaden your perspective,” she said. “That’s why you have to talk to people different from you, read books that disagree with you and go to different countries.”

Alzouby believes views of refugees in the U.S. could be shifted with more education and empathy.

“Just being empathetic is important, and trying to put yourself in [refugees’] shoes for a second and see how their life might’ve been affected, why these people are here and why they fled their countries,” she said.  I think a lot of people lose sight of that. Compassion has no limits.”

Currently in her first year of pharmacy school, Alzouby hopes to complete a global rotation abroad during her fourth year. Once she graduates, she wants to put her clinical skills to good use and possibly return to Syria or a refugee camp.

Alzouby is involved in a number of volunteer groups, such as the pharmacy school’s Student Health Action Coalition (SHAC), which provides various pharmacy services and volunteer work to local underserved individuals in the community. She also works with local refugee communities through a variety of programs, including the Zakat Foundation, UNC-Chapel Hill’s Muslim Students Association and the new UNC-Chapel Hill chapter of Students Organize for Syria, for which she serves on the executive board.

“It taught me a lot about the importance of service,” Alzouby said. “Everyone has a way to do it — every student at this university has a special skillset, and people from every major who have something unique about them can use it to help people in the community.”