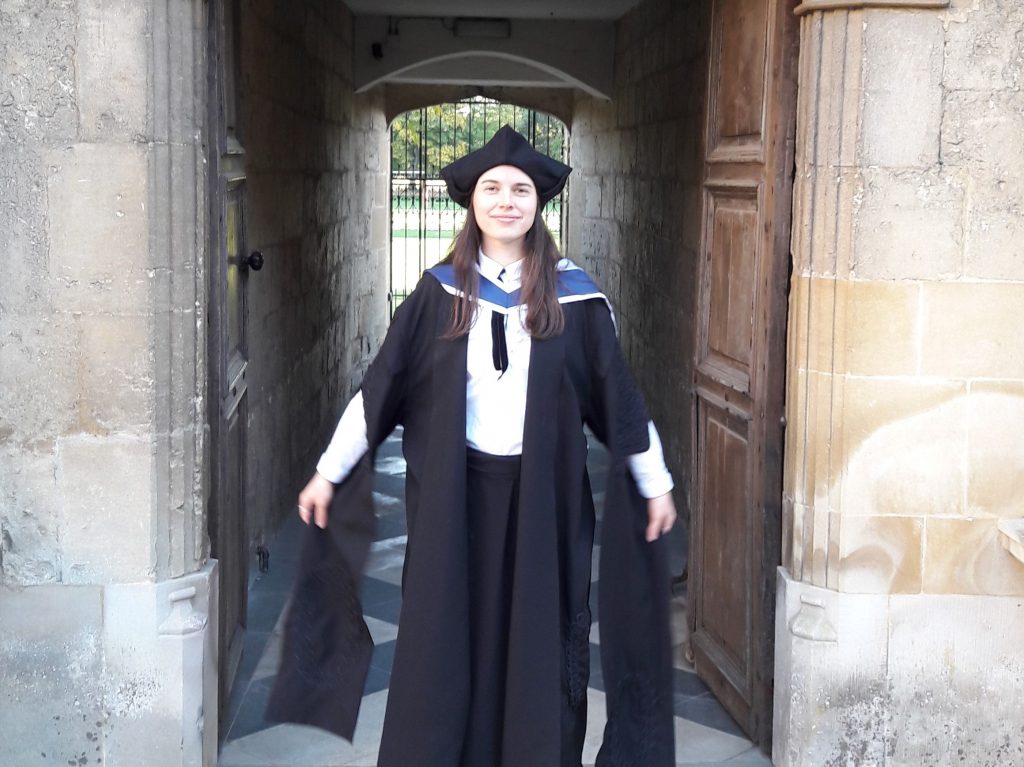 When Jordan Maly-Preuss ’16 started studying biology as an undergraduate at the University of North Carolina at Chapel Hill, she had no idea she’d one day use her background in science to analyze ancient Greek poetry. Yet, that’s exactly what she’s found herself doing as she begins her doctoral studies in classical languages and literature, focusing on ancient Greek, at Merton College at the University of Oxford.

Maly-Preuss draws a close connection between the sciences and humanities, noting that she considers the systematic modes of thinking in the sciences to be useful within literary studies.

Maly-Preuss will use the same interpretive methods to examine the poetic elements of the oldest Greek epics, such as the Iliad and the Odyssey, alongside Greek poems composed as late as the third century, comparing the patterns in narrative features such as speech introductions and descriptions of characters.

Maly-Preuss’ grounding to pursue this course of study came largely through UNC-Chapel Hill’s post-baccalaureate certificate in classics, which she earned in 2016. Because Maly-Preuss followed a less-trodden path into the field of ancient languages, she started with a limited knowledge of Greek—and several dedicated instructors helped her navigate the field.

“I had very generous and supportive Greek teachers willing to accept me as someone on a non-traditional trajectory and give me input into the language learning process. The professors had confidence in me, so when I wanted to move on in the field, I moved forward with that emotional bolstering in place,” Maly-Preuss said

Before starting her doctorate, Maly-Preuss’ studies were diverse. Choosing one topic for in-depth research each year of her master’s program, Maly-Preuss opted for Greek narrative in the first, looking at how historical writing and poetic epic narratives are structured. Documentary papyrology was her second-year choice, in which she researched preserved papyrus documents that provide records of ancient history.

She says one of the biggest takeaways from documentary papyrology was that “One needn’t have the impression the ancient world is removed from us by some insurmountable barrier, because we can still access information about specific individuals, families and social groups. It shows you people have very much the same concerns.’”

Today, Maly-Preuss finds herself more than grateful to have received a joint scholarship from the Faculty of Classics and the Stonehouse Foundation, which is allowing her to attend the University of Oxford.

Maly-Preuss has found her place among the scholars and researchers at Oxford, and she’s appreciative for those who’ve helped her get there. Her parents have supported her throughout her academic career, going so far as to move with her to England and staying for two months while she adjusted to life there at the beginning of her master’s program. Other scholars in her programs and her husband—whom she met when they were both master’s students—have also played significant roles in her success.

Looking forward to the next few years of dissertation research, Maly-Preuss also aspires to a long career of university teaching, not unlike the professors who have been instrumental in her accomplishments.