Going Beyond The Classroom 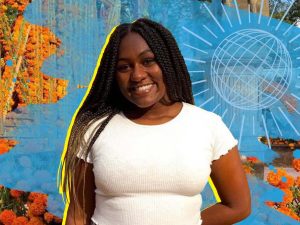 A self-described ‘Type A’ high school student in an International Baccalaureate program, Simone McFarlane’s gap year before college was not only a way to take a break from the academic grind, but an opportunity to partner with communities while exploring interests that motivated her throughout high school.

“I was always doing schoolwork; school was my whole life, and I never questioned if that’s what it should be,” McFarlane said. “I’ve always been interested in international relations. After graduating high school, I was considering going into diplomacy, concentrating in gender studies in Latin America. What better than to learn about all the intellectual curiosities that actually got me through high school? What would it mean for me if I could learn about this in these places?’”

The Global Gap Year Fellowship is an innovative program that funds global service opportunities for incoming Tar Heels. The program is supported by gifts to the Campus Y from Carolina parents Doug and Shawn Mackenzie, as well as anonymous donors. In a highly selective admissions process, candidates apply for the fellowship then go through an interview process, resulting in the final cohort of fellows. In 2020, the program was able to expand from seven to up to 21 fellows per year thanks to the continued support of the Mackenzie family.

Fellows defer admission to Carolina for one year and must spend at least six months of that year in service abroad. The Global Gap Year Fellowship provides an $8,000 stipend to each recipient to support their gap year, an intensive summer training program before they serve, a re-entry retreat before fellows start at UNC-Chapel Hill, as well as mentoring and advising throughout the process.

Despite all this support, McFarlane was taken aback at the amount of freedom and independence she was allowed as a recent high school graduate planning such a long opportunity. Instead of sitting back passively in a classroom, she had to take charge and create her own path.

“It is so much independence,” she said. “Planning it really gets you ready for the year. You can do the Global Citizen Year through the Global Gap Year and they have things neat and ready for you. That’s an excellent option. But there’s also the self-designed option, which I did.”

“We worked closely with men’s rehabilitation centers actually, because at the time CASA was really passionate about speaking with men on fighting against machismo and trying to enhance dialogue about gender violence,” McFarlane said. “We did workshops on the gender spectrum and how cultural expectations of being a man can lead you to express yourself in violence.”

While McFarlane was surprised by CASA’s approach to gender violence prevention, she said she stepped up to the plate and learned from the experience.

“As an 18-year-old fresh out of high school, being in a room with a lot of older men, trying to get them to take you seriously — or at least trust you enough to share their experiences — is a lot. I think that [experience] really enhanced my ability to speak to anyone and how to engage with people to make them comfortable to share their vulnerabilities.” 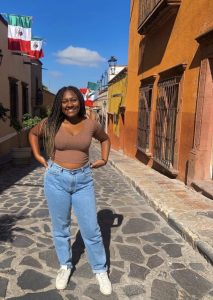 She also served at CASA’s sexual health clinic and administrative offices. In addition to helping out with community workshops and visits to rehabilitation centers, she took on administrative duties in producing and designing promotional materials and translating documents for grants.

“I didn’t really appreciate the work I did on promotional materials until recently. Everything was made using the design software Canva, but I was making the graphics myself and getting to be creative that way. I’m starting to see the virtue of that in my work now. At the time, I didn’t realize or articulate my interest in the artistic side of things, but I do think that was a nice experience for realizing that part of myself,” McFarlane said.

In early 2020, McFarlane continued her global gap year and traveled to Barranquilla, Colombia, a coastal Caribbean city. In Barranquilla, she was able to connect with her own Afro-Caribbean heritage.

“[Going to Barranquilla] was really special to me because my heritage is also Caribbean,” she said. “It was interesting being in a place where everyone looked like me, and I had never really experienced that to the same extent. I’m a first-generation American, the only person who was born in the U.S. in my family, so while I have been surrounded by other Black people in my life, it’s still a different culture. Even though I was in a vastly different place in Colombia, I felt closer to my culture than I did in the U.S. There is a lot of value in having a passport to both cultural identities.”

Barranquilla is home to the second-largest Carnival in the world, and McFarlane was present (and celebrated) during Carnival 2020.

“It was such a privilege to be in community with the people whose heritage quite literally made Carnival the thing that it is. So much of what makes the festival famous is the African-originating dances and music.”

Her service position in Barranquilla was teaching English and history at an underfunded, predominantly Indigenous and Afro-Colombian school in a different part of the city than where she was staying. While she connected with the young students and learned about Colombian culture and history, she also developed an interest in urban planning and the impact of a built environment on health while commuting across the city.

McFarlane reflected, “I was staying in a ‘bougier’ (middle or upper class) part of the city, and I would travel into where I would work. You could just materially see the difference in the infrastructure, the air quality, the transit, the space on the roads. It was formative for my current interests in urban planning and the urban commons in general. At least to me, it explains a lot of my interdisciplinary approach to environmental science now.”

When the COVID-19 pandemic broke out in March 2020, almost all Carolina students studying abroad were called back home. This extended to future Tar Heels who were studying on the Global Gap Year Fellowship. For McFarlane, that meant abruptly leaving her teaching position in Colombia.

Despite her time being cut short, McFarlane describes the experience as transformative, and said that her gap year helped her be a more confident and adventurous student than she was in high school.

“So many things can go wrong in your gap year.” she explained. “You just have to pivot, take a deep breath and accept it. So I think I entered college being like, if I could get through that, I could get through anything. I came in with a lot more confidence in my ability.”

With her newfound confidence, McFarlane gave herself the chance to go out on a limb and try new things.

“When I was applying to college as a high schooler, I said, ‘I’m not taking another math course, another science course, I’m done with all that,’” said McFarlane. “Which is really funny because now I’m an environmental science major! I came into college and took business prereq courses and a calculus class. I was able to explore that interest; I never would have given myself the opportunity if I had come straight from high school.”

One group of people who could probably attest to the transformative nature of McFarlane’s year abroad is the selection committee of the Robertson Scholars Leadership Program — a full merit scholarship with meaningful connections, year-long leadership programming and summer opportunities. She applied as a senior in high school, but was rejected. With her newfound confidence, she decided to give it a second shot as a first-year at Carolina. Following her successful reapplication, she is now a member of the Robertson Class of ’24.

“My application back [in high school] was very stoic and curated to what I thought they wanted to see,” said McFarlane. “When I applied again in my first year of college, I was like, ‘I have nothing to lose, everything to gain, and I’ve had this whirlwind of experiences. If I communicate that and my values clearly in my own voice, the worst they can say is no.’ My application was a lot better in that sense, and I think being able to speak about how my gap year influenced me helped me stand out in the selection process.”

Although her gap year was cut short, one gets the sense that McFarlane truly did it all. Between graphic design, grant writing and working directly with local communities, McFarlane served on a global scale and brought what she learned to Carolina.

“My gap year was the most exhilarating experience of my life,” McFarlane said. “Never before have I felt so close to myself. Living in new environments enhanced my self-awareness and humility, and these traits have invigorated my curiosity about this world.”

This story was originally published by the Campaign for Carolina.