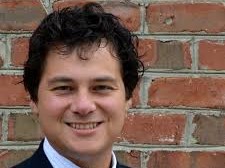 Andrew Herrera, an alumnus from the UNC Gillings School of Global Public Health, has been selected to receive a 2020 Health Care Hero Award from the Triangle Business Journal. He is one of 24 winners that include doctors, nurses, volunteers and administrators in health care settings and nonprofit organizations across the Triangle.

The winners of the Health Care Hero Award were chosen based on demonstrated innovation and compassion to improve the human condition. Herrera was honored for his leadership role at Curamericas Global – a global health nonprofit headquartered in Raleigh, North Carolina – and his commitment to improving community health in the Triangle and communities across the globe.

Curamericas Global, where Herrera serves as executive director, strives to improve the health of women and children in remote areas around the world, including countries such as Haiti, Sierra Leone, Guatemala, Kenya and Bolivia. He joined the organization in 2009 and has held his current position since 2013, where he directs strategic initiatives to provide basic health education, medical services and community involvement to areas that lack access to adequate maternal and child health care.

In his time at Curamericas, Herrera has helped build domestic programs for community health in both North Carolina and Pennsylvania to bring health services to more than 1,000 people. In 2019, the organization’s partnership with the Guatemalan Consulate in the Triangle region provided valuable health care services at no cost to patients, as well as education from trained professionals about at-home wellness and basic preventative care.

“I am honored to receive this recognition from the Triangle Business Journal and to be named among a group of incredible leaders in the local health care industry,” said Herrera. “I am proud to be working every day to make our world better, and I couldn’t do it without the support of my family, colleagues and the Curamericas Global Board of Directors.”

Herrera received his Master of Public Health degree in 2017 from the Gillings School’s Public Health Leadership Program in the Leadership Track with a focus area of field epidemiology. In an interview with the Gillings School in 2017, he said the program allowed him to work full-time while in school and immediately apply what he learned to his outreach at Curamericas.

His personal belief in the moral obligation to do good for the community has driven him to seek continuing education opportunities to enhance the work he does for Curamericas. This led him to travel weekly to attend classes at the University of Chicago School of Business, where he earned his Master of Business Administration degree in 2019.

Before he joined Curamericas in 2009, Herrera served with the City of Raleigh Parks and Recreation for four years and spent a year studying in Ecuador. In 2004 he served as a State Department Ambassador to Jiaonan, China through the American Field Service.

Herrera, along with the other winners of the Health Care Hero Award, will be honored at an upcoming dinner event on Feb. 13 and will be featured in the Feb. 14 edition of the Triangle Business Journal.