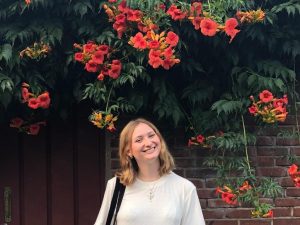 Ever since she was young, Eleanor Murray has been a daydreamer, and it’s what led her to become so fascinated with the world.

“These expansive daydreams are fueled by an interest in the world that was instilled in me through my education,” said Murray. “I chose global studies because my curiosity about the world is relentless.”

In high school, she read “The Kite Runner,” a New York Times bestselling novel about a young boy from the Wazir Akbar Khan district of Kabul, Afghanistan during the Soviet military intervention.

“While the messages of hope, sacrifice and love the main character heralded rang true to myself, the context of religious and ethnic conflict was unfamiliar,” said Murray. Learning about a world that was so different from her own inspired her passion to study global relations.

“Through classes that help to expand my imagination and daydreams, to books that touch my heart in new ways, global studies fuels my curiosity in the most exhilarating way possible.”

But Murray’s global activity at Carolina goes far beyond the classroom. She’s learning Korean, and in her free time, she studies Japanese. She helped run Model United Nations conferences and competed on the national collegiate circuit, and for most of her college career, Murray was involved in the Carolina International Relations Association (CIRA).

“CIRA introduced me to the world of diplomacy, a career I hope to pursue someday!” she said.

In the summer of 2021, Murray studied at Yonsei University in South Korea as a Phillips Ambassador. Through the program, she produced a research paper on the socioeconomic status of North Koreans living in South Korea. “I hope to use this as a base point for my future endeavors in diplomatic relations and humanitarian aid,” Murray explained.

This semester, Murray taught her own course, Gender Relations in South Korea, through Carolina Students Taking Academic Responsibility through Teaching (C-START). The Honors Carolina program provides students the unique opportunity to develop and teach a course of their own design.

After she graduates, Murray hopes to work on East Asian policy research and eventually work in the world of diplomacy.

“My time as a global studies major at Carolina has helped solidify my interest in global relations, and with the foundations this program has taught me, I am ready to tackle post-grad life!”