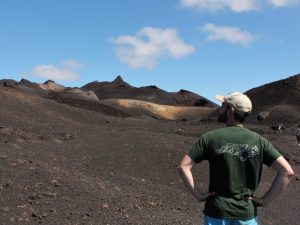 Will looking out at the volcano on Isabela Island while wearing a t-shirt showing a geologic map of NC.

As a large public university, UNC Chapel Hill has many opportunities for students to get involved in research, but it is not every day that an undergraduate student has his own work published in a scientific journal. UNC Alum Will Larsen was able to navigate undergraduate research with a scientist in the Galapagos during his time at UNC, after stumbling upon UNC Center for Galapagos Studies. The opportunities he was afforded in the Galapagos allowed him to explore his passions for science and the outdoors. Now, three years into the Masters of Earth, Environmental, and Planetary Sciences program at Rice University, he has officially published a paper on his research in the Galapagos Islands.

While at UNC, Will worked part-time at the outdoor center, now known as Carolina Adventures. “Being able to share a deeper understanding of the natural world can help someone else appreciate nature. Leading group trips was an outlet for me to combine my two passions,” said Will. Will’s path to becoming a published author started long before UNC. He grew up camping, backpacking, kayaking, climbing, and hiking at his home in Charlotte, North Carolina. For him, working in science is a dream job. “You can spend a month in the field bushwhacking through the thick rainforest and then the next year analyzing samples in the lab. As an outdoors enthusiast I am at home outdoors, and as a chemistry enthusiast I am at home in the lab,” said Will.

To supplement his time at Carolina Adventures, Will worked in the lab of UNC ecologist Dr. Allen Hurlbert. That summer, Will secured an NSF research grant through Dr. Hurlbert, and volunteered in the lab full time conducting caterpillar surveys around Chapel Hill and coding a database of population data from all sorts of different papers. He practiced his coding, a skill he recommends to any young scientist. “Coding is like learning a new language. It is going to be terrible until it is not,” said Will.

Will started his UNC journey in the Biology department. “I realized that chemistry is the coolest part of biology,” he said. Will switched gears one more time when he decided to major in geology, volunteering in UNC geologist Drew Coleman’s radiogenic isotope lab.

After gaining some experience, Will applied for an undergraduate research fellowship in the Geology department and decided to apply to go to the Galapagos to take data samples. He contacted Dr. Diego Riveros-Iregui from the Department of Geography at UNC. “I asked him if I could just…follow him around,” said Will.

To Will’s surprise, Diego agreed. “Will Larsen first contacted me in the spring of 2017 and expressed interest in traveling to Galapagos to conduct a field experiment. When he reached out to me, he had already designed the experiment and found the funding to travel, which struck me as quite a mature approach in such a young student. I was further impressed by his clear understanding of geological processes and interactions between water and rock,” said Diego.

Will described his work in the Galapagos as the most impactful experience in his scientific career. “While Dr. Riveros-Iregui shared with me the vast knowledge he had about earth systems, he also outlined the process of undertaking an earth science research project from fieldwork to writing and publication. Besides gathering data on the landscape via personal observations, he showed me the importance of interviewing local farmers about their observations. As visiting scientists, we have so much more to learn from the people who have spent their lives observing the land and have a deeper connection and understanding of it,” said Will.

Read more on the Center For Galapagos Studies website.