Home / News Stories / In Cities with Poor Sanitation, Waste-Borne Diseases May Also Be Spread Through Air

In Cities with Poor Sanitation, Waste-Borne Diseases May Also Be Spread Through Air 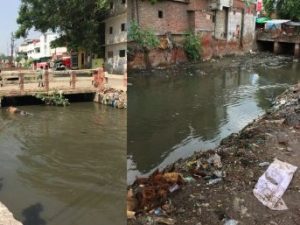 Microbes that cause many waste-borne diseases are present in air particles around areas that have open sewers, according to a new study that includes research from the UNC Gillings School of Global Public Health. These pathogens have the potential to spread into the surrounding environment, putting local inhabitants at risk. 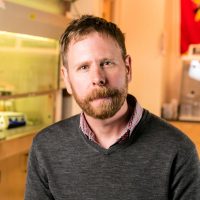 “While we expected to find indicators of airborne fecal contamination — not uncommon in cities — we were surprised that we found such a diverse array of enteric pathogens in air, including several not previously identified in outdoor urban environments,” Brown said. “These included Giardia, norovirus and several pathogenic bacteria that are among the most prevalent etiologies of intestinal illness globally.”

Atlanta, which has a comparable population density, served as a reference site because it has an established underground sanitation system, although surface waters that drain into Atlanta’s watersheds are often exposed to pollution and sewage overflows that may carry enteric pathogens. The team chose the sites at La Paz and Kanpur because of overall poor sanitary infrastructure, including open sewers receiving domestic, commercial, institutional and industrial waste in close proximity to the urban core. Open sewers are common in low- to middle-income countries (LMICs), where they serve important drainage and flooding control functions. Closed sewers in these places may often clog because of poor solid waste management. Sub-standard sanitation infrastructure creates opportunities for waste-borne diseases to spread through multiple pathways, including direct contact, indirectly via food and drinking water, as well as in aerosols that are deposited on surfaces and other environmental media. 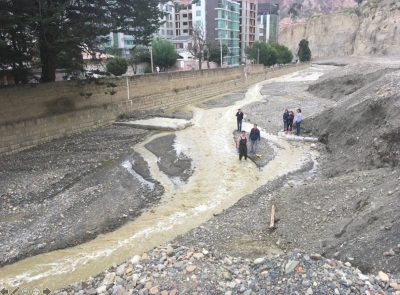 A team of researchers studies an open wastewater canal.

“To identify the pathogens, we examined samples for DNA or RNA only, which means we could not determine whether pathogens were viable or infectious,” Brown explained. “Notably, 76 percent of samples from Kanpur and 25 percent of samples from La Paz were positive for culturable E. coli, indicating that at least some enteric microbes in those samples may have been viable or capable of infecting at the time of sampling.”

In contrast, no pathogens found in aerosol particles in Atlanta were accompanied by culturable E.coli.

While the risk implications of the findings are still unclear, according to Brown, the data suggest that enteric pathogens can be transported in aerosols in environments with open sewers or waterways receiving waste. Further research based on these findings will help experts understand the role that this pathway plays in transmission of infections, if any.

“We are working with our collaborators to develop fate, transport and quantitative risk assessment models to understand the implications of sanitation-related aerosols in cities with poor sanitation,” he said. “We know now that enteric pathogens can take flight under some conditions. The remaining questions are about whether these phenomena contribute to disease risk in environments that are pathogen rich and how to minimize exposures in affected populations.”