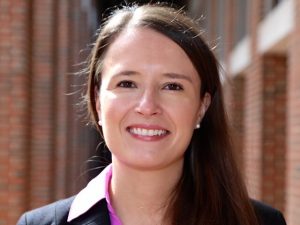 Ioana Costant has been named director of International Student and Scholar Services (ISSS), effective June 1, 2020. Costant has served as interim director since August 2019.

“Ioana is an excellent leader and a talented immigration attorney,” said Raymond B. Farrow, associate provost for global affairs. “As interim director, Ioana’s leadership has been instrumental during the upheavals caused by COVID-19, both for our international students and scholars as well as our campus colleagues. She is committed to ensuring Carolina remains a welcoming destination for our international community, and I look forward to her continued leadership as ISSS director.”

Prior to stepping into the interim director role, Costant served as the assistant director of ISSS overseeing employment-based immigration services since 2016. In that role she advised international faculty, scholars, and the campus community and handled complex employment-based non-immigrant and immigrant petitions. She previously worked at the Kenan-Flagler Business School, where she developed best practice guidelines for faculty recruitment, and was a staff attorney at AYUDA, a nonprofit in Washington, D.C., before entering private practice as an immigration attorney in New York City. Costant received a J.D. from Indiana University School of Law, a master’s in psychology from Maastricht University in the Netherlands and a bachelor’s in psychology and communication studies from UNC. She has lived abroad in Brazil, Colombia, the Netherlands, and Belgium, and is fluent in Dutch, and has additional language skills in Spanish and Portuguese.

Costant became interim director after Elizabeth Barnum retired in August 2019 after serving in the position since 2012.