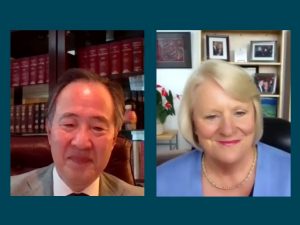 Koji Tomita, Japanese ambassador to the United States, affirmed the importance of the U.S.-Japan alliance and said that the U.S. and Japan should continue to strengthen political dialogues, economic cooperation and people-to-people exchanges in an Oct. 6 virtual discussion about the countries’ alliance.

The livestream event was part of “Diplomatic Discussions,” a dialogue series featuring career diplomats and national security experts organized by the Office of the Vice Provost for Global Affairs as part of its Diplomacy Initiative. The initiative, led by UNC-Chapel Hill’s Vice Provost for Global Affairs Barbara Stephenson, a former U.S. ambassador and senior diplomat, aims to enhance Carolina students’ understanding of the practice of diplomacy, described by Stephenson as, “bringing people together to address shared challenges.”

Tomita’s talk was a continuation of the series’ look at the Quadrilateral Security Dialogue (Quad), a strategic dialogue among the U.S., India, Japan and Australia. The first discussion, “U.S.-India Relations Under the Biden Administration,” explored the Quad from the American and Indian perspectives.

Tomita, who attended the Sep. 24 Quad Leaders’ Summit at the White House, spoke about the value of aligning like-minded nations and their institutions, with U.S. leadership, in the emerging global competition between liberal democracies and authoritarian regimes.

“Indeed, you can say that the competition will test not only military strength, but the very efficacy and legitimacy of our system, so this would add new missions to traditional alliances and call for more robust engagement with a wider community of nations sharing our values,” said Tomita.

Tomita spoke of efforts by Japan, the U.S. and Australia to help India expand its vaccine production, “focusing on practical, specific and pressing needs in the Pacific region,” he said. “So the number one priority is vaccination cooperation. This habit of collaboration will be extremely important.”

Tomita described Japan’s chief diplomatic goal as realizing a free and open Indo-Pacific region. The U.S.-Japan alliance will be critical to achieving that goal, in cooperation with a broader community of nations that share their values and principles.

“As the United States shifts its strategic focus to the Pacific region, I believe Japan can play a huge role in facilitating U.S. engagement with countries in the region through the extensive network we have nurtured over the years,” said Tomita.

After the ambassador’s prepared remarks, he answered a question from a UNC-Chapel Hill student about the current direction of Japan’s military.

“We have now a completely different set of challenges,” said Tomita, acknowledging previous security concerns from the Soviet Union and Korean peninsula. “I think this is going to be an evolving process; the security picture in the region is changing rapidly.”

Barbara Stephenson, vice provost for global affairs at Carolina, noted that Tomita’s talk was relevant for students across academic disciplines.

“You provided a basis for all of us, from political science and Japanese studies majors to biomedical engineers, to better understand the U.S.-Japan alliance and the context for future collaboration,” she said to Tomita.

This event was organized by the Office of the Vice Provost for Global Affairs at UNC-Chapel Hill.