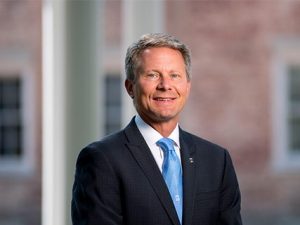 “Kevin Guskiewicz possesses the leadership qualities needed to take Carolina forward: strength, poise, humility, vision, the strong proficiency to listen, and the ability to bring people together,” said Roper. “Throughout his distinguished career in higher education, Kevin has demonstrated a sustained track record of success. I have the utmost confidence that UNC-Chapel Hill will continue to flourish and prosper under his continued leadership.”

Chancellor Guskiewicz was selected by Roper for approval by the Board of Governors from among two final candidates for the position. These finalists were chosen by a 20-member search committee, which included students, faculty, staff, alumni, trustees and the community. Community members were provided opportunities to share input throughout the process.

“Not only is Chancellor Guskiewicz a visionary leader in his field of neuroscience, but he has already proven himself to be a visionary leader in the administration of UNC-Chapel Hill,” said Board of Governors Chair Randy Ramsey. “Under his leadership as both interim chancellor and dean, he has won praise from his peers as the university has celebrated many successes. Now that he is formally installed, the university will be able to harness this momentum and set a clear course for long-term achievement. His leadership will provide operational stability, while also promoting innovations in teaching and research that have secured UNC-Chapel Hill’s reputation as one of the top public universities in the world.”

Chancellor Guskiewicz succeeds Carol Folt, who served as chancellor from July 1, 2013 until January 31, 2019. As interim chancellor, Guskiewicz held over 25 listening and learning sessions with constituents across campus. He was instrumental in shaping Carolina’s new strategic plan, Carolina Next: Innovations for Public Good, which outlines a roadmap for the University’s priorities moving forward. He also relaunched the Tar Heel Bus Tour with 90 faculty and campus leaders, demonstrating Carolina’s commitment to the state.

Prior to his appointment as interim chancellor, Guskiewicz served as dean of the College of Arts & Sciences – Carolina’s largest academic institution – since January 2016. With more than 16,000 undergraduate students and 2,500 graduate students, Guskiewicz made interdisciplinary teaching and research a cornerstone of his tenure. He championed the use of high-structure active learning techniques, making Carolina a national leader in implementing these highly effective educational strategies. He significantly increased study abroad, academic internships and other experiential learning opportunities for Carolina students and oversaw work on a major revamp of the University’s General Education curriculum.

“The Board of Trustees and I have been honored to work with Guskiewicz in his interim role and truly believe he is the visionary leader that Carolina needs today,” said Chair Stevens. “Over the past 10 months, Guskiewicz has guided this University with a stable and sure hand. He is deeply committed to our University and its mission, prioritizing student success, fostering interdisciplinary collaboration and addressing the critical needs of North Carolina and the world.”

A Kenan Distinguished Professor of Exercise and Sport Science, Chancellor Guskiewicz has been a member of Carolina’s faculty since 1995. He is co-director of the Matthew Gfeller Sport-Related Traumatic Brain Injury Research Center. The chancellor is a nationally recognized expert on sport-related concussions. He maintains an active research portfolio and is P.I. or co-P.I. on three active research grants totaling over $20 million. His groundbreaking work has garnered numerous awards and has influenced concussion guidelines in the NCAA and the NFL.

In 2011, Chancellor Guskiewicz received the prestigious MacArthur Fellowship (often called a “genius grant”) for his innovative work on the diagnosis, treatment and prevention of sport-related concussions. In 2013, Time magazine named him a Game Changer, one of 18 “innovators and problem-solvers that are inspiring change in America.”

Guskiewicz earned a bachelor’s of science in athletic training from West Chester University, master’s of science in exercise physiology/athletic training from the University of Pittsburgh and doctorate in sports medicine from the University of Virginia. Born and raised in Latrobe, Pa., he lives with his wife Amy and children Jacob, Nathan, Adam and Tessa in Chapel Hill.

Before becoming dean, Chancellor Guskiewicz was senior associate dean for the natural sciences and chair of the Department of Exercise and Sport Science.

“I am humbled and honored to be named the 12th chancellor at the University of North Carolina at Chapel Hill,” said Chancellor Guskiewicz. “Carolina has been my home for almost 25 years, and I am grateful for this opportunity to serve every member of our community. My vision for Carolina is that we will move forward into the future with boldness and confidence because our work is vital for the people of our state, the nation and the world. There is no institution in the world that is more capable of changing the future than our nation’s first public university. I am committed to championing our community, fighting for our values and demonstrating that we make a difference in the lives of all North Carolinians.”