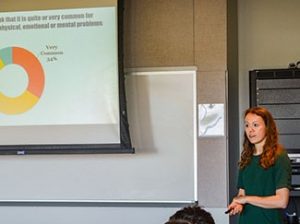 Students and faculty gathered in the FedEx Global Education Center on Oct. 15, 2018 for a lecture on the mental health outcomes of military veterans presented by Sharon Stevelink, lecturer in epidemiology at the King’s College London Centre for Military Health Research and Department of Psychological Medicine.

Katie Bowler Young, director of UNC Global Relations, introduced Stevelink and provided context about UNC-Chapel Hill’s strategic partnership with King’s. The partnership, first established in 2002, now has established connections in more than twenty areas of scholarship and research. Over 100 faculty members at UNC-Chapel Hill have engaged in the partnership in some way. This was Stevelink’s first visit to Carolina; during her visit, she met with UNC researchers whose work also focuses on aspects of the military.

Stevelink’s lecture on “The Impact of War: An Update on the Mental Health of U.K. Armed Forces Deployed in Iraq and Afghanistan” engaged the audience as she posed questions about perceptions of the mental health of military personnel. Stevelink then displayed research findings that nuanced and challenged these perceptions. Her audience at UNC-Chapel Hill was among the first to hear about findings from the most recent phase of her research, which covers the years 2014-2016 and has just been published in The British Journal of Psychiatry.

While a majority of Stevelink’s lecture focused on data about military personnel in the U.K., she also spent time comparing the data with similar research from the U.S., observing that U.S. military personnel are more negatively affected by service than their U.K. counterparts. Stevelink highlighted demographic groups in both countries that are more at risk for negative mental health effects – specifically young men and soldiers in lower ranks. She also proposed that the majority of former military personnel have good health and well-being, despite media headlines and the assumptions gathered in her initial questions to the audience.

Responding to questions from the audience, Stevelink further addressed cultural differences, gender and recommendations for the future as they relate to the mental health of soldiers in the U.S. and U.K.. She emphasized the importance of building mental health resilience during service rather than waiting until after discharge. Early awareness, she says, will help minimize the number of people who delay reaching out until experiencing a crisis point.

Stevelink’s lecture was organized by UNC Global Relations and co-sponsored by UNC Global, the Center for European Studies, the Curriculum in Peace, War, and Defense, and the Department of Psychology and Neuroscience.

During her visit to Carolina, Stevelink was accompanied by Helen Litvak, director of brand and marketing in the King’s External Relations Directorate, and Dina Zaher, senior international marketing officer.