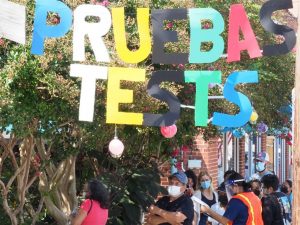 At the edge of a farm’s fields on a hot June day, a woman lingered in a tree’s shade as people lined up for COVID-19 vaccinations.

She had come to a mobile clinic in Cedar Grove, North Carolina, organized by the Chapel Hill-Carrboro NAACP and a local Baptist church, but she had concerns. Dr. Michael Herce watched as his UNC Health colleagues and the woman’s friends who set up the clinic talked with her. A few minutes later, she decided to get her first dose.

At pop-up COVID-19 testing and vaccine clinics across central and eastern North Carolina, Herce has seen how people trust local organizations that partner with Carolina’s health care professionals. “They have earned their trust and gently help people make up their minds to get vaccinated or tested,” he said. “The doctors, nurses and pharmacists also reassure people by talking to them like a friend or family member.”

Those partnerships in Williamston, Siler City and other towns are resulting in people from historically marginalized populations, such as Latinx farm workers and Black residents in rural areas, receiving care that will save lives and stop the pandemic.

“We work with leaders in the community who channel our team’s resources in effective ways to deliver care that is responsive to their community, led by the community, engenders trust and leads to good outcomes,” Herce said. “They are our partners in health and point us to the places and the people who need services.”

Relying on community-based partners is standard for Herce, an assistant professor in the UNC School of Medicine and associate director of international operations at the medical school’s Institute for Global Health and Infectious Diseases. Prior to joining Carolina’s faculty, Herce trained in internal medicine and global health equity at Harvard Medical School/Brigham & Women’s Hospital before living and working in Malawi and Zambia. In those countries, he applied a community-based approach to prevent and treat epidemic diseases such as HIV and tuberculosis. He sees local communities as the leading partners in that work.

“I focused on how to partner with communities and governments in low- and middle-income countries to support the delivery of health care that’s equitable and that accounts for the local epidemiology of disease,” he said. “Through these partnerships, we aimed to deliver health care we would want for our own families, regardless of context, geography, socioeconomic status or background.”

The health fairs succeeded because El Vínculo Hispano, a trusted information source, communicated in Spanish to the community. The organization’s peer educators, project managers, leadership and volunteers got the word out in culturally appropriate ways that people acted on.

“That’s an example of messages that are differentiated and tailored for a community and empathetic to people’s situations. It’s ultimately more successful than generic messaging,” Herce said.

In July, UNC Health was in Williamston after community organizers such as Juan Allen, a benefits advocate with Access East, which provides health care management throughout eastern North Carolina, and local “tienda” owner Doña Teresa, promoted a clinic. The team tested and vaccinated farm workers under tents set up at the farmers market. “It wasn’t just the doctors and nurses showing up with vaccines,” Herce said. “It was our community partners who got people comfortable with the idea of getting vaccinated.”

The mobile clinics started in spring 2020 as a testing response to get ahead of what health care providers saw in the hospital. “We were just taken aback by the disproportionate number of people of color that we were treating and who were in our ICU,” Herce said. He and his colleagues began talking with community partner Piedmont Health, a network of federally qualified health centers that has served the Piedmont’s historically marginalized communities since 1970.

Meanwhile, health departments in Lee County and Chatham County contacted UNC Health and Piedmont Health about planning pop-up testing clinics. “Our response was ‘We’re seeing the downstream effects of the pandemic. We’d love to get upstream with you and offer our services,’” Herce said. The partners held testing clinics in Chatham, Alamance and Lee counties while encouraging public health measures such as masks and physical distancing. Piedmont Health followed up on all patients who were tested and made sure anyone who tested positive or was ill visited a hospital for treatment.

The team began building additional partnerships with community organizations like El Vínculo Hispano and the Baptist State Convention of North Carolina, which independently were addressing pandemic-related issues and socioeconomic effects such as job losses, food insecurity and housing. They were also increasingly working in health-based ways to encourage vaccination, testing and masking.

A coalition formed of the willing and the motivated who are naturally aligned to work on the same things. “We found natural partnerships and it’s grown into something really meaningful,” Herce said.

The community partners know that many among marginalized populations have been classified as essential workers and required to work during the pandemic. Others have worked in crowded circumstances or with inappropriate infection control so they could feed their families. Many live in multigenerational or multifamily homes.

“In those settings, workers could expose family members to COVID, especially those who are vulnerable because of their age or medical comorbidities,” Herce said. “Those communities were disproportionately affected early on, and we heard stories from our community partners about entire households getting sick or people losing siblings or multiple people in a household.”

The problems drove local organizations to go into communities to offer COVID-19 services instead of relying on people to visit doctor’s offices and other health care settings.

“All of us want to hear accurate information from trusted sources, from people that we know and respect,” Herce said. “It’s one thing to get public health messaging online or through a television channel or newspaper, but it’s something else to get it through an organization in your community or through your own social network of family and friends.”

Each community partner contributes uniquely to the work. Piedmont Health has registered people online so that the clinic team can forecast how many vaccine doses or test kits they will need and so that anyone who tests positive receives follow-up care. County health departments find venues, coordinate service delivery activities and contact community stakeholders who can tell people about upcoming clinics. Others, such as the State Laboratory of Public Health, have provided swabs, laboratory testing and testing materials. Local emergency services personnel keep people safe, and law enforcement handles traffic control. Vaccinations come from whichever partner can supply them.

The Piedmont area work is NIH-funded, Herce said, and other funding comes from partner organizations leveraging relationships and resources.

Learning from the community

Herce lived among the people he served while practicing medicine in Malawi and Zambia. He experienced the collaborative power of partnerships to prevent and treat HIV in marginalized and hidden populations such as female sex workers and incarcerated people.

“I learned that the collective group is stronger than any individual and that working in partnership and solidarity with the communities you want to serve and learning from them is the best way to deliver any health intervention,” he said. “Our work is not about the doctor being the hero. It’s about the communities leading.”

Herce hopes that doctors will rely on community partners to add a personal connection. “They’re trusted and empathetic, and they meet people where they are. That’s how we can get to the last-mile vaccination for communities that have been left out of the response.”

Read more about the Herce team’s COVID-19 work with historically marginalized communities through an NIH grant from the RADxUP initiative.